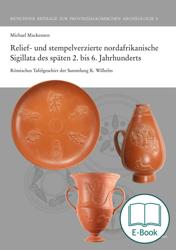 E-book 2 22.6 MB
This study focuses on the wide range of vessel forms and decoration of the rare appliqué-decorated red slip ware from northern Tunisia, and especially the appliqué-, relief- and stamp-decorated sigillata made in the most imprtant mid and late Roman potteries at Sidi Marzouk Tounsi in central Tunisia. The exceptional collection of vessels accumulated by K. Wilhelm forms the basis of this work and is presented here in a catalogue documenting 138 complete vessels and 104 fragments, including numerous unique forms and motifs of decoration. The analysis of the appliqué and relief decoration with pagan, allegoric and early Christian motifs documents the iconographic change of themes over the centuries. It is particularly noteworthy to highlight the end of production of the late Roman mould-made, relief-decorated red slip ware not before the middle of the 6th century AD.

The study presents a summary of the development over 500 years of the high-quality North African red slip ware, a fineware which was mainly used as tableware. The masterful handicraft of several large pottery production centres in one of Rome’s economically most important provinces, Africa Proconsularis, is particularly well reflected in the exceptional relief-decorated wares. The study focuses on the rare appliqué-decorated north Tunisian red slip ware of the late 2nd/early 3rd century and also the wide range of forms and decorations of the appliqué-, relief- and stamp-decorated red slip ware of the early 3rd to mid 6th century, produced in Sidi Marzouk Tounsi, the most important pottery production centre in central Tunisia which operated for at least 350 years. Production at this site included lamps and terracotta figurines in red slip ware as well, but in particular a wide variety of plain and decorated red slip ware vessels made not only for a regional market, but for Mediterranean long-distance trade.
Research is based on the exceptionally extensive collection accumulated by K. Wilhelm mainly between 1960 and 1995. The material is presented in a catalogue containing 138 vessels and 104 fragments, including several unique vessel forms and a series of unknown appliqués and stamp types. For comparison, some important, but partially unpublished vessels and fragments in several European, North American and North African museums and private collections were additionally taken into account.
For the first time, the decoration schemes and also the vessel forms of an appliqué-decorated pottery produced in a north-eastern and in another central Tunisian production centre throughout the late 2nd and 3rd century, are classified and clearly represented. The research also succeeded in defining the late phase of the so-called El Aouja ware and highlights the stylistic development leading to the appliqué-decorated red slip ware of the 4th century. Moreover, the analysis of the appliqué and relief decoration with pagan, allegoric and early Christian motifs emphasises an iconographic transformation over the centuries based on the visible change in the figural scenes. Of utmost importance is the fact that the production centre at Sidi Marzouk Tounsi clearly survived the Vandal rule of the provinces Africa and Byzacena (429-533/534). Alongside the late relief-decorated red slip wares, there is now also evidence for the production of mould-made, relief-decorated red slip ware platters and several specific forms with mainly Christian motifs, far exceeding the previously suggested end of production (c. 430/440) and suggesting an end around the middle of the 6th century.

Michael Mackensen (*1949) studied Archaeology of the Roman Provinces, Prehistory and Ancient History at Munich, Freiburg and Oxford from 1969 until 1977. After his MA (1974), PhD (1977) and a travel scholarship granted by the German Archaeological Institute/DAI (1977/78) he participated in excavations of the DAI at Carthage (Tunisia) and Resafa (Syria). From 1982 to 1994 he was research assistant at the Bavarian Academy of Sciences conducting excavations in Bavaria (e. g. Nersingen, Kellmünz) and a survey project at El Mahrine (Tunisia). In 1991 he submitted his habilitation thesis and then became Professor for Archaeology of the Roman Provinces at the Ludwig-Maximilians University of Munich in 1994. He carried out various field projects in Bavaria (2001–2007 Burghöfe), Tunisia (1998/99 Chemtou), Egypt (2001/02 Deir el-Bakhît; 2005–2017 Nag al-Hagar) and Libya (2009/10 Gheriat el-Garbia, LMUexcellent-Project limes Tripolitanus). In 1989 he was allocated with the Kurt-Bittel-Preis für Süddeutsche Altertumskunde, in 2010 with the Preis für gute Lehre des Freistaats Bayern and in 2013 with the LMU Lehrinnovationspreis. In March 2015 he was retired.