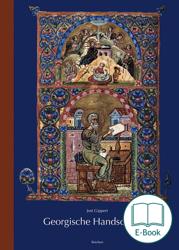 E-book 90.0 MB
Few languages ​​in the world look back on more than 1500 years of uninterrupted written tradition – Georgian, the language of the Christian country south of the Caucasus, is one of them. Since their Christianisation in the fourth century, Georgians, in constant exchange with neighbouring peoples, have created an immense wealth of literary cultural heritage, which has been reflected in countless handwritten books. To open up this treasure to the interested German-speaking audience is the task of the present book, which was created in close cooperation with the K. Kekelidze Georgian National Centre of Manuscripts, Tbilisi, and which is built upon contributions by numerous authors. From the Manuscript Centre, this is first of all the team of Maia Karanadze, Lela Shatirishvili, Nestan Chkhikvadze and Tamar Abuladze, whose album "The Georgian Manuscript Book: 5th to 19th Centuries" (2012) with its rich illustrations has been an invaluable basis for the present handbook. In addition, the Manuscript Centre and its director, Zaza Abashidze, provided valuable text contributions, in particular a detailed account of the Georgian scripts authored by Elene Machavariani and a comprehensive treatise on the development of Georgian scripture compiled by Zurab Chumburidze. Furthermore, the present work includes Georgian-related contributions from the handbook “Comparative Oriental Manuscript Studies” (Hamburg 2015), for which Bernard Outtier, Tamara Pataridze and the present editor are responsible. The contributions of the many scholars who have been working for decades at the Manuscript Centre in Georgia or outside cataloguing Georgian manuscripts cannot be specifically mentioned. Without their preparatory work, the publication of this book would have been impossible.