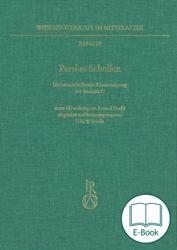 E-book 3.7 MB
The satires of A. Persius Flaccus (34 - 62 A.C), written in the times of the Roman emperor Nero, were a favourite reading in pagan as well as in christian antiquity, also in medieval times (we know about more than 650 manuscripts of the text of the satires between the 9th and 16th century); they were also reading matter in the schools and therefore commented many times.
The commentaries of antiquity are lost, but transmitted in an unknown extent into the medieval commentaries which are preserved in manuscripts from the 9th to the 16th century (about 75 anonymous school commentaries, and - based on these scholia - in more than 35 commentaries of medieval scholars). The texts of these school commentaries were hitherto almost unknown; for the scholia edition of O. Jahn (1843), published as “scholia antiqua”, offers only an uncritical mixture of texts of some manuscripts and the edition of the “Commentum Cornuti” of W. Clausen - J. Zetzel (2004) contains only the text of 4 manuscripts of one branche of the 5 traditions (A, B, C, D and E) which were reconstructed as a provisional orientation by Robathan - Cranz (1976) by the readings of only some verses of the beginnings of the Persius scholia.
The critical scientific edition of all Persius scholia is the target of the project which in 2009 could publish the texts of the traditions A, D and E and which now publishes the scholia of tradition C. The edition of tradition B is being prepared. Comprehensive prefaces to all volumes discuss all relevant questions of the Persius commentation in antiquity and middle ages.
The scholia of Persius which in a seldom found variety and tightness reveal the school reception of an antique author in Middle Ages, can help to give answers to many questions: first there is the open question of the Persius reception in the European schools in Middle Ages in different times and different regions. Thereby we can learn about their working and learning methods, also on the knowledge about antiquity in the schools of that time - and as there is no such a documentation of another antique author, this project can serve as a model for all others. Furthermore as the medieval scholars wrote their Persius commentaries on the base of the scholia, we can detect the working methods and the peculiarities of these scholars, and thereby we learn about the readers of these commentaries. Finally there is the problem of the antique Persius scholia: when we have recognized the peculiarities of medieval commentators, we can try to separate the antique material within the medieval scholia and then describe the development of understanding and explaining of literary texts, relevant for the history of education and culture, from antiquity to Middle Ages.