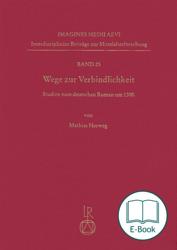 E-book 4.3 MB
Ulrich of Etzenbach's "Wilhelm von Wenden", Heinrich von Neustadt's "Apollonius von Tyrland", Johann von Würzburg's "Wilhelm von Österreich", and the anonymous "Reinfried von Braunschweig", and "Lohengrin" exemplify the tradition of medieval German romantic verse around 1300. The book seeks to define the position of these five major novels in their historical context from the perspective of hybrid, historicizing, and particularly encyclopedic narrative detail. The five texts are thereby measured as a literary series that in the wake of the two leading novelists of the later 13th Century, Rudolf von Ems and Konrad von Würzburg, and in the context of neighboring genres such as ancient novels and verse chronicles, stake out the relationship between fiction and history. An important role is played by the often presented "planning games" coming out of dynastic and royal rule, which often massively undermine the apparent idealism of the protagonists.
This series, which will comprise doctoral and professorial dissertations and other monographs as well as collective volumes, aims at highlighting and promoting interdisciplinarity in Medieval Studies even more than is currently the case. Works from all branches of Medieval Studies will be accepted, provided they emphasise the aspect of interdisciplinarity, i.e. they attempt to transgress the boundaries of any single subject.