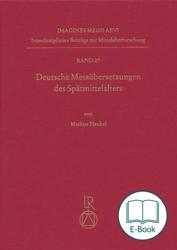 Sample 84.3 KB
Thomas Müntzer was the first among the reformers to not only hold Mass and the daily prayer in German, but to set these liturgical forms down in print, allowing them to be distributed around the city of Allstedt, Germany. In the years 1523 and 1524, several writings appeared in quick succession, including "Ordnung und Berechnung des Deutschen Amtes zu Allstedt" (Order and Calculation by the German Office of Allstedt), which introduced a German liturgy and sought to replace the Latin version.
But in contrast to German Mass itself, the translation of German Mass texts do not stem from the impulses of the reformers, but find their roots in the late Middle Ages. This study focuses on the hand-written translations dating from the early 14th Century to 1516. This temporal restriction is necessary, as from the beginning of the reform movement the liturgy not only translated, but also changed and celebrated texts, thus distancing them more and more from their Latin originals.
Mathias Henkel examines both the reception of the translations, as well as their form and function. An edition and a transcription of most texts round out the study.
This series, which will comprise doctoral and professorial dissertations and other monographs as well as collective volumes, aims at highlighting and promoting interdisciplinarity in Medieval Studies even more than is currently the case. Works from all branches of Medieval Studies will be accepted, provided they emphasise the aspect of interdisciplinarity, i.e. they attempt to transgress the boundaries of any single subject.