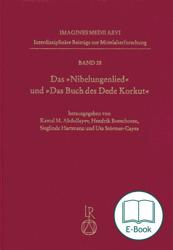 E-book 3.3 MB
This volume of conference proceedings brings the “Kitab Dede Korkut” into the spotlight of intercultural comparative studies of medieval heroic epic poetry. The oldest and only complete manuscript version of this pre-Osman epic is preserved in the Saxon State Library (Dresden). The most recent German translation is by Mainz Turkologist Hendrik Boeschoten. Thus ideal opportunities for academic cooperation between Azerbaijan and Germany are presented, aiming to bring Eastern and Western academic discourses together. Topics from areas such as syntax, lexis, word formation, onomastics and speech act theory are examined from the different linguistic perspectives of the two traditions. This represents not just a bridging of the gap between East and West, but it is also new territory for German research on the “Nibelungenlied”.
This volume contains selected papers from the first symposium titled “The Book of Dede Korkut and the Nibelungenlied - an intercultural comparison of epic poems”, which took place from 30 September to 4 October in Baku, Azerbaijan. This first symposium was organized cooperatively by its host, Baku Slavic University, together with the Institute of German Studies and the Department of Oriental Studies at the University of Mainz, and the Oswald von Wolkenstein-Gesellschaft (Frankfurt am Main). The primary aim of the symposium was to explore new directions in intercultural epic research. A further objective was to realize a plan to bridge the gap between Western and Eastern academic discourses.
Thus the volume contains publication versions of papers whose purpose was to allow the German studies participants on the one hand and on the other the Turkologists, particularly Azerbaijani linguists, to gain insight into each others’ research areas; this led for example to individual aspects such as the stanzaic structure of the Nibelungenlied being examined from the different perspectives of German studies scholars from Germany and Azerbaijan; furthermore, more general issues are addressed, for instance the relevance of the Nibelingenlied for German studies internationally, and the significance of the Book of Dede Korkut as a textualized version of an oral epic for the study of the Azerbaijani language as a branch of the Western (Oghuz) Turkic language family.
Further contributions thematize topics located mainly within the area of linguistic analysis. In order to test the capacity of this pilot project exploring intercultural comparative studies on medieval heroic epics, linguistics has been understood in its broadest sense here: syntactic structures, speech act theory and lexocographical viewpoints are just as well represented as the linguistic background of poetic structures or the onomastics of heroic names.
A contribution on the topic of orality in medieval heroic epics took the form of a concert performed on 2 October 2009 at the Kapellhaus, the German cultural centre in Baku. The well-known Nibelungenlied performer Eberhard Kummer and the Azerbaijani musical group Savalan presented their interpretations of the epic narratives in the form of an improvised musical exchange. A report on this very special intercultural event brings the symposium volume to a close.
Kamal M. Abdullayev, Baku
Professor of General Linguistics and Turkology, since 2000 Rector of Baku Slavic University, numerous publications (in Russian and Azerbaijani) on general linguistics (special area: syntax) and on pre-Osman heroic epics, research centring on the “Kitab Dede Korbut;” author of dramas and narrative works, honorary member of the Azerbaijan National Academy of Sciences.

Hendrik Boeschoten, Mainz
Professor of Turkology, academic training in the Netherlands, since 2002 holder of the chair in Turkology and head of the Department of Oriental Studies, University of Mainz; main areas of research and publication in comparative Turkology and in the edition and translation of medieval texts, especially the “Kitab Dede Korkut” (Dutch translation 2005, German 2008); member of the editorial board of the journal “Turkic Languages” (since 1996).

Uta Störmer-Caysa, Mainz
Professor of German Philology / Medieval Literary History, since 2002 holder of a tenured Professorship of Medieval German Studies at the University of Mainz; numerous publications on medieval German literature, focusing on late medieval mystics (especially Meister Eckart) and on courtly literature of the High Middle Ages, particularly heroic epics; publications include a new edition of “Kudrun” (Middle High German with a translation into Modern German and a commentary, 2010).
This series, which will comprise doctoral and professorial dissertations and other monographs as well as collective volumes, aims at highlighting and promoting interdisciplinarity in Medieval Studies even more than is currently the case. Works from all branches of Medieval Studies will be accepted, provided they emphasise the aspect of interdisciplinarity, i.e. they attempt to transgress the boundaries of any single subject.