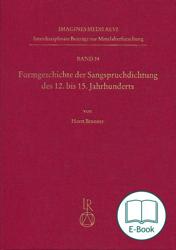 E-book 2.9 MB
In spite of the widespread opinion that medieval poetry, and particularly song, is to a great extent a formal art, questions of form are often marginal in research concerning the surviving texts. By contrast, this book, based on decades of research, analyses the often elaborate tones, i.e. the strophic forms and the numerous surviving melodies of medieval German verse lyric, in an extensive and systematic way for the first time. The history of this art of for the most part professional poets with a keen sensitivity for tradition spans a period from the late 12th until the second half of the 15th century – the work of Walther von der Vogelweide and Reinmar von Zweter, the anonymous Wartburgkrieg, the texts and tones of Konrad von Würzburg, Frauenlob, Heinrich von Mügeln and Michel Beheim mark high moments in this development. Altogether, we know of 78 inventors of tones and nine further anonymous tones. Besides Minnesang, verse lyric was the second great genre of song in German medieval literature.
All the surviving 253 tones will be analysed from metrical and musical viewpoints, as far as possible in chronological order, and integrated into the course of the form’s history. The most important metrical and musical terms are explained in the introduction. Thanks to the extensive index, the book can also be used as a handbook or reference book.

Born 1940, studied German, Musicology and Latin Philology in Erlangen and Zurich, doctorate 1966, habilitation 1971, associate professor in Erlangen, 1981-2006 chairholder for German Philology in Würzburg; research projects and publications on the history of medieval and Early Modern German literature and music.