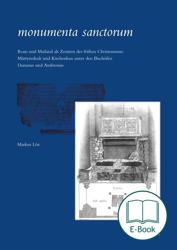 E-book 18.0 MB
This study compares the building projects, written and epigraphical testimonies, and performative actions of two outstanding figures among fourth century bishops, Damasus and Ambrosius. These monumenta sanctorum worked as catalysts of the emerging cult of the martyrs. Moreover, the different manifestations of episcopal presence, some of which are here examined critically for the first time, illustrate the influence of the two bishops on the process of christianisation in their dioceses, Rome and Milan. Using partly different strategies, they both had a large part in the development and representation of a local Christian history. Their approach in this served as a model for numerous other cities and shaped the Christian cult of the saints into the Middle Ages and beyond.

During the overlapping periods of their episcopates, both Damasus (366-384) and Ambrosius (374-397) aimed at consolidating their episcopal auctoritas. In this regard we notice differences, but also similarities in their utilisation of the monumenta sanctorum, which include building projects and literary testimonies as well as the performative staging of inventions of saints. The aim of this study is to evaluate these similarities and differences in a detailed comparison and to find explanations for the chosen ways of asserting episcopal presence.
Following a biographical outline and a characterisation of the ecclesio-political and social field within which the two bishops operated (Chapter 1), the changes to the Christian iconic topography of Rome and Milan caused by the building projects of Damasus and of Ambrosius are evaluated (Ch. 2).
First, all building projects attributed to Damasus will be critically examined on the basis of the archaeological evidence in order to show the true extent of his building activities and assess Damasus’s contribution to the development of a Christian iconic topography of Rome (Ch. 2.1; Appendix A). Such an overview of the building projects of this Roman bishop was not available before now. Damasus followed the example of his predecessors in his urban building activity, but thereby also engaged in competition with aristocratic church foundations. With regard to this, the fact that he qualified his titular church for the episcopal liturgy with a solea was not previously taken into account. The action in the catacombs, often described as extensive by researchers, can be linked to an architectural portrayal of the tomb under Damasus with certainty only in one case. An improved accessibility of the tombs of the martyrs cannot be confirmed.
The following section of the paper focuses on the church foundations of Ambrosius (Ch. 2.2; Appendix B). Contrary to a frequently advocated opinion, Ambrosius can only be considered to be the founder of two churches outside of Milan (basilica Apostolorum and basilica Ambrosiana).
A comparison of both bishops’ building activity shows that both extended their area of influence, escpecially in the suburbium, and adopted a private form of Chritian cult practice, the cult of the martyrs. By integrating relics into his churches and into the liturgy, Ambrosius facilitated their collective worship while at the same time withdrawing the martyrs from direct access by the congregation. Thus, the cult of the martyrs in Milan was more closely tied to the person of the bishop than in Rome and gained an official nature. Damasus, on the other hand, was named in the inscriptions of many martyrs’ graves and thus became an intermediary in private cult practice. By being involved in building projects around the tombs of the Princes of the Apostles, he highlighted the pre-eminence of his diocese, which was the only one to have two apostles’ graves.
The following chapter offers a comparison of the literary monumenta sanctorum (Ch. 3). Despite the largely dissimilar literary work, the epigraphical sources help to reveal correspondences in form and content. However, the differences prevail: In the epigrams of Damasus, which accentuate the bishop’s education with literary quotes, the martyrs are used as historical examples and to justify the universal claim to ecclesiastical leadership of the Roman diocese. In the work of Ambrosius, the local martyrs of Milan play a secondary role but serve to highlight the achievement of Ambrosius in revealing these miracle workers to his congregation.
The performative manifestations of episcopal auctoritas, analysed by using the example of the inventions of the martyrs, show marked differences (Ch. 4). The chapter attempts to answer the following questions: 1. How did Damasus / Ambrosius know where to search? 2. How was a tomb identified as that of a martyr? 3. What rituals where performed during the invention of a tomb? 4. What kind of audience was adressed at the moment of invention? The analysis shows that Damasus’s inuentiones were marked by the preservation of the tomb’s integrity; he adressed a small group of privileged community members. Ambrosius, on the other hand, staged the inventions as mass spectacles, which, combined with the translatio, were meant to demonstrate to his community his power of disposal over the martyrs.
In the fifth, summarising chapter, the general view of the presentation of episcopal auctoritas is broadened with some further aspects, such as the exchange of gifts and the bishops’ burial.
In conclusion, both are united in their instrumentalisation of the monumenta sanctorum to consolidate their position in conflicts within their communities. Damasus’s activities are additionally shaped by the claim to primacy of the Roman diocese, whereas Ambrosius focused more on securing his own memoria.
Life and works of the two bishops are considered to be already exhaustively studied. However, the method of a personalised comparison applied here makes it possible to illuminate, among other things, their strategies for consolidating their own position or for the representation of holiness. The new observations and insights obtained here contribute to a better understanding of the process of christianisation and the development of the cult of the martyrs in general. Ambrosius and Damasus had a lasting influence on the future role of the bishop and the basis of his, in some cases transregional, influence in the second half of the fourth century. Therefore the present detailed study explains mechanisms of the assertion of episcopal presence which can also be found outside of Rome and Milan and retained validity far beyond the period of late antiquity. For this reason, this book provides a helpful basis for further research on the episcopate and the Christian cult of the martyrs.