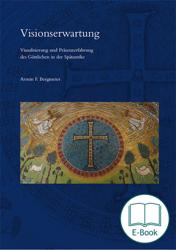 E-book 56.4 MB
The book identifies the central role of the visions of God in late antique society, arguing that expectation of visions (“Visionserwartung”) structured much of late antique life. The author demonstrates that through images and spaces, late antique people created encounters with the invisible Christian God. Due to their immaterial and temporary nature, these visions allowed late antique people to circumvent the Old Testament prohibition of images of God. It was only with a change in the understanding of images at the end of Late Antiquity that images of visions became problematic and their importance began to decline.

This book explores the emergence of images of God in Late Antiquity, pulling on a long tradition of important works by Johannes Kollwitz, Friedrich Gerke, Frédéric van der Meer, Christa Ihm, Hans Belting and Jean-Michel Spieser. Expanding the state of research to include an analysis of the cultural background that led to the depiction of God, Bergmeier argues that Late Antiquity struggled with how to negotiate the Old Testament ban on images of God alongside the desire (“Visionserwartung”) to have direct contact with the deity. Late Antiquity solved this paradox by depicting ephemeral visions of God, which made possible the close contact so desired.
Bergmeier’s research corrects a lacuna in art history, which has largely ignored the immense influence of visions in the history of the production of images. Until now the discipline has failed to recognize the full array of visionary motives and their complex, interrelated nature. The publication explores the various strategies used by late antique image-makers to visualize God, demonstrating how, on the one hand, antique visual formats were adapted for this new purpose and how, on the other, new visual solutions emerged to meet the needs of depicting the Christian God (Part Two). In contrast to the majority of early Christian images, which relied heavily on pagan models, these theophanic motives often represented new visual innovations.
Finally, Bergmeier explores the phenomenological impact of images—how they created an experience of real visions. Late antique concepts of encounters with the holy are placed into dialogue with early Christian understanding of sacred spaces to demonstrate how these images produced meaning for their viewers (Part Three). Expanding upon the phenomenological research on late antique images of God, Bergmeier comes to an important and revolutionary thesis: while scholarship has assumed that these holy visions of God were depictions of a future moment, close analysis of Late Antique texts reveals that these visionary images were understood by contemporaries as images of the present moment.
More than an iconographic study of theophanic images in Late Antiquity, Bergmeier’s research explores for the first time the cultural history of the emergence of images of God from c. 300-750, drawing on detailed study of texts and images in equal measure (Part One). Bergmeier mobilizes theological, historical, and religious studies scholarship, connecting textual research on antique images of the gods with scholarship on Christian culture in Late Antiquity. By not only highlighting the importance of images of God in late antique culture, but demonstrating their fundamental significance as modes of direct engagement in the present moment with the otherwise invisible God, Bergmeier’s scholarship radically reshapes the field of late antique art history. And through its interdisciplinary mode of inquiry, the book promises to transform our understanding of Late Antique culture.

Armin studied art history at the Humboldt University in Berlin and at Middlesex University, London. He received his Ph.D. in late antique and Byzantine art history from Ludwig-Maximilian University in Munich and spent a year at Columbia University as a visiting scholar. During his studies, he taught introductory courses in Late Antique art history at the Humboldt University and the Ludwig-Maximilian University. Since 2016 he has taught late antique, Byzantine, and medieval art history at the University of Leipzig. His scholarship has been supported by fellowships from the Protestant Academic Scholarship Fund, Fulbright Foundation, and the Minerva Foundation. He has held research residencies at the Dumbarton Oaks Research Library, the Art History Institute in Florence, and the Centro Tedesco in Venice. Recent publications have appeared in the journals Millennium, the Journal of Late Antiquity, and Gesta.