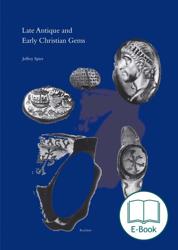 „Gem stones bearing Christian symbols, iconography, or inscriptions have been known for a longtime, and occasionally such pieces can be bought from antiquity dealers. The British Museum has the largest collection, but this is the first really comprehensive catalogue, complete with items from private collections, and complete, of course, with plates. More than a thousand items are here classified and listed, including a few Jewish gems and a number of forgeries. the items date mostly from the 3rd and 4th centuries CE, though some are later. Item no. 734, recently declared a forgery by Paul Finney, is here taken to be genuine; it shows the sacrifice of Isaac and is dated to ca. 300 CE. (Item no. 439 refers to the prohet Barlaam, but meant is Balaam.) - An indispensable scholary resource on early-Christian art.“

„In general early Christian gems have been neglected by historians of late antique art and culture, despite their explicit contemporary discussion by Clement of Alexandria (in Paedagogus 3.59-60) and their interesting relationship with the heritage of pagan magical amulets and talismans. Yet they are of crucial importance for an understanding of the development and transmission of early Christian iconography - giving for example our earliest (pre-Constantinian) evidence for such image-types as the crucifixion. Their evidence is complex since most such gems are not known through well-documentated archaeology or by their find spots, but through collections (ranging from early medieval ecclesiastical and royal treasuries to modern museum and private collections, via such intermediaries as Renaissance antiquaries and connoisseurs). Moreover, until the wonderful and comprehensive catalogue under review here, it has not been easy for scholars to track down the objects except via specific museum catalogues, wich may publish given collections but give little sense of an overview. Jeffrey Spier’s excellent publication of this material should help significantly to redress this ignorance, and its 155 pages of plates, each with numerous gems upon it (alas, none in colour) make the serious study of this important class of early Christian art genuinely possible. After a brief introduction (“Early Christian gems lost and found, five hundred years of study and collecting“) and a first chapter on the end of the classical tradition of gem carving, Spier’s chapters take us through the mass of material in a series of overlapping classifications - chronologically, by geographic groupings, by type of stone and by iconographic types. Chapters iii-vii straddle the Peace of the Church, going from the third to the fifth century by portraits (not really a „Christian“ category, but useful to have it here), gems with Christian inscriptions and monograms, gems with Christian symbols, with the Good shepherd, with narrative scenes from the Old and New Testaments, and Christian magical gems. The next nine chapters cover a wide range of material, mostly later and reaching into the seventh century, but with cameos (in a chapter devoted to a very specific type of gem and including the famous portrait cameo perhaps of Honorius and Maria now in Paris) glancing back as early as the third. As with any kind of material that is valuable in itself and often of unknown provenance, the question of forgery must always be at the back of one’s mind, and chapter xvii of this volume contains a good section on such material, unfortunately most of it not illustrated and combined with authentic but misattribtued items. This book is of course a concerted argument or a monograph, but its contribution is substantive, its scholarchip deep and its presentation excellent.“

In: Journal of Ecclesiastical History. Vol. 60/1 (January 2009). p. 139.
Jeffrey Spier teaches in the Department of Classics at the University of Arizona. He has published catalogues of the gem collections of the J. Paul Getty Museum and the Gulbenkian Museum in Lisbon, as well as many articles in the field. He is also the curator and author of the forthcoming exhibition, Picturing the Bible: the Earliest Christian Art (Kimbell Art Museum, Fort Worth, Texas).