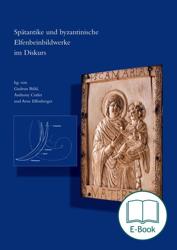 E-book 181.6 MB
Gudrun Bühl received her Ph. D. in Byzantine Art History at Freiburg University in 1990, specializing in Early Byzantine Art and with a focus on iconography for her dissertation on the representation and meaning of personifications of cities, especially Roma and Constantinopolis. After teaching Byzantine Art and Archaeology at the University of Göttingen, she was assistant curator of the Byzantine Collection at the Bodemuseum in Berlin and lectured on Byzantine Art at the Berlin Freie Universität. As an archaeologist, Gudrun Bühl has participated in surveys of Byzantine rural settlements in Turkey. Since 2005 she serves as curator and director of the Dumbarton Oaks Museum.

Anthony Cutler is the Evan Pugh Professor of Art History at the Pennsylvania State University. The author of numerous books and articles, he has established himself as an international expert on ivory carving with such works as The Hand of the Master: Craftsmanship, Ivory, and Society in Byzantium (Princeton University Press). He has been a member of the Institute for
Advanced Study at Princeton, a resident in art history at the American Academy in Rome, and has held four fellowships at Dumbarton Oaks, Harvard University‘s Center for Byzantine Studies in Washington, D. C., as well as a Paul Mellon Fellowship at the Center for Advanced Study in the Visual Arts at the National Gallery of Art in Washington, D. C. He held the Humboldt
Research Prize from the Alexander von Humboldt Foundation in Germany in 2001-2002 and was a visiting scholar at the University of Chicago during spring 2001. Dr. Cutler was named a Fellow of the John Simon Guggenheim Memorial Foundation for 2002-03 and was elected a Fellow of the Medieval Academy of America in 2005. In Spring 2009 he will be a Senior Research Associate at the Khalili Centre at Oxford University.