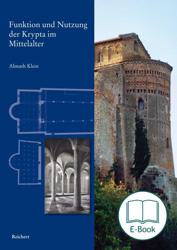 E-book 33.3 MB
Under the lasting influence of romantic-mystic views of the 19th and 20th century the function of a crypt within the structure of a church is still a matter of false interpretation. This book discusses on basis of a broad range of examples which were erected during the 11th and 12th century in Italy the possibile use of this building type. The crypt is embedded within a clear structural system and hierarchy of the whole church structure even though its functions are different.
The main function of a crypt was to house the tomb of a saint as the author shows on various examples in Italy. There is no difference between the types of saints and their sepulture: if the saint was buried on the site of his martyrdom, if the tomb contains translated relics of a Early Christians martyr or confesser or if it is a burial vault for a contemporary cleric whose canonization was intended. Often is a new church building connected with a constitution of a cult, so it seems that the discovering of a tomb of an assumed holy person not only justifies but also requires the enlargement and improvement of a church. Based on this fact one might conclude that the hall crypt implies a tomb of a saint as the ring crypt does. But there is more to it. Through windows and holes which connect the crypt and the upper church it is obvious that the most sacred is hidden beneath the high altar.
At the same time this construction establishes and confirms authenticity. It suggests a “traditio” of the burial site and emphasizes the importance of a city. The venerated persons are often not canonized, a practice developed not until the 11th century. Until then the constitution of a cult lays in the hands of the respective bishop or abbot, a burial in the crypt equates to a canonization and legitimate the cult. The possession of a whole body relic is therefore a safe investment for a church because it ensures a regular income through endowments and donations to the venerated saint. Besides the cultic function crypts enlarge the surface for the construction of an upper church and even rough area. For this purpose the hall is the most suitable form, because its layout follows that of the upper church and with a system of small groin vaults it stabilizes the building. There are numerous of different solutions and this fact shows clearly that this design meets different demands of the principal as well as of the topographical situation. The crypt raises the choir and enlarges the church, it frames with ambitious and sophistcated vaults and columns the tomb of the saint and enhances the status of the church as well as of its owner who could afford such a building.

Almuth Klein studied art history at the universities of Mainz, Pisa and Basel. She is working at the Germanisches Nationalmuseum in Nuremberg and preparing there a catalogue of the furniture collection from 1650 to 1800.