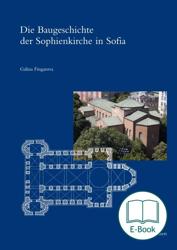 E-book 90.5 MB
The unique architecture of the Hagia Sophia Church in Sofia, Bulgaria, gives it a prominent role not only in the history of the city, which assumed the name of the church, but also in the architectural history of the Balkan region and the Byzantine Empire. And yet, a critically urgent and thorough investigation of this monument has so far not taken place. With the full-scale study on the construction history of the Hagia Sophia Church, that gap is now closed in a convincing manner.
Making use of a detailed architectural survey, the careful analysis of the findings, and the study of previous structures and the topography of the city, while also taking into account the cultural and geographical interrelationships and application of art historical and archaeological methods, a number of unanswered questions can now be clarified. First, the origin and the original appearance of the monument are determined, followed by a discussion on influences and donors. The result sheds new light on the architectural history of the location of the Hagia Sophia Church, and its importance in the context of Byzantine architecture.
Previously unpublished plans, and carefully selected old and new photographs accompany the investigation.