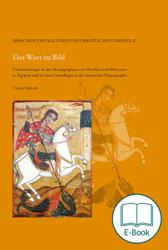 E-book 47.2 MB
In the Coptic Church, numerous pictorial representations with Christian content attest their deep significance for the Coptic faith. In order to give expression to individual motifs, individual passages from various texts were transformed into works of representational art, and thus specific forms of representation were created.
This study brings together for the first time in a monograph the iconographies of twelve monks and martyrs in Egypt and also the hagiographic textual sources that were determinative for their representational images. Furthermore, new identifications, corrections, and reconstructions are offered, and the iconographic variants that are found in icons of the eighteenth and nineteenth centuries are described.
In this way, questions about the “word in pictures” and the relationship between Coptic hagiography and Coptic art can be given a copious answer.

Pictures with Christian content are an important aspect of the religiosity of the Coptic Church, and in the form of wall paintings, icons, book illustrations and objects from the minor arts they attest their deep significance for the Coptic faith. In order to give expression to individual motifs, artists drew upon hagiographic texts, in which the lives, miracles, and deaths of Christian saints are evocatively described. Passages from such texts were artistically transformed into works of representational art, and thus a specific iconography was created for each saint.
Gaining insight into the representational schemata that thus emerged and the textual sources on which they were based is made difficult by the fact that research in this area tends to focus either on the art historical side, with studies of icons or wall paintings, or on the philological side, by means of text editions. In this study, the pictorial material from the fifth to eighteenth centuries and also the written hagiographic sources that are relevant for the iconographies of twelve selected monks and martyrs in Egypt are brought together for the first time in a monograph.
Because of their quantity and quality, the icons, wall paintings, and book illustrations represent the most important groups of representational objects and so constitute the broad basis of the pictorial material, which is enlarged by diverse objects from the minor arts, such as stelae, ampullae, and textiles. Because the chosen group of individuals is limited to monks and martyrs, the Coptic Lives, Martyrdoms, encomia, and miracle stories, as well as the Copto-Arabic Synaxarium represent the crucial corpus of texts. The Coptic manuscripts used are all dated to the period between the ninth and the fourteenth centuries. The relevant passages from them are quoted both in the original Coptic and in German translation.
The group of individuals investigated is divided into the two groups monks and martyrs, which makes it possible to highlight the striking differences in the specific iconographic features of each group. Each saint is presented in a separate chapter containing the results of the investigation as well as a “catalogue” listing all the written and pictorial sources that were used in the study. The main results of the study extend from the iconographic analysis aimed at identifying the representational motifs and isolating their textual sources, through new identifications, corrections, and reconstructions, to the iconographic variants found in the icons of the eighteenth and nineteenth centuries.

Carola Nafroth studied Egyptology, Coptology, and Classical Archaeology at the University of Muenster 1999–2005; in 2013 she received her Ph.D. in Coptology.
Her major research interest is art history from Late Antiquity into the Middle Ages.
As independent curator for the Gustav-Lübcke-Museum in Hamm, she designed the museum’s new permanent exhibit “Egypt” and continues to develop special exhibits devoted to various themes.