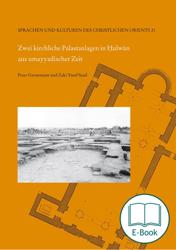 E-book 15.5 MB
The book deals with two ecclesiastical palaces. They were excavated by the Egyptian antiquities service in the years 1948/49 and they are dated according to the sources to the end of the late antiquity (ca. A.D. 700). They belong thus to the few architectural monuments which beside some churches came down to us. The two palaces of Hilwan represent thus an important contribution to our knowledge of the late antique architecture of Egypt, a period of which until now only a few churches are known.

The book deals with the publication of two late antique or early Christian building complexes which according to their shapes and records in the sources are interpreted as two ecclesiastical palace buildings. They are both not anymore existing, but thanks to the carefully produced survey records of the buildings at least the floor plans on paper could be re-gained. Both palaces date to the tolerant Arab governor Abdal Aziz ibn Marwan (A.D. 685-705) and give thus an idea how an ecclesiastical palace at the end of the late antiquity would have looked like. They contained living quarters, churches, each a large reception hall or dining-room etc. and demonstrate in this way that during the Umayyade time the erection of churches was still not principally forbidden.
But on the other hand both palaces offer only an uncomplete picture of the architecture during the period of the late antiquity. Examples of the earlier period have been still not discovered. They stay thus at the threshold from the classical antiquity to the Byzantine Middle Ages. Until the middle of the 8th century the Christian architecture in Egypt followed still the tradition of the local examples as it becomes obvious in the two triconchoi. After this date, however, the architecture became Byzantine. Small churches came into being with cruciform floor plans and four-pillar churches of similar sizes or the spatial a bit larger octagon-domed churches in which the central dome rested on eight pillars. Examples of the latter are to be found nearly exclusively in Greece. Only from the region of Aswan in Egypt some further examples are known.

Born 1933; study of architecture at the university at Karlsruhe; ; 1970 promotion to Dr. ing.; since 1965 consultant for antique architecture and Christian archaeology at the DAI in Cairo; since 2007 participating at the Italien excavation at Antinoopolis (Egypt)