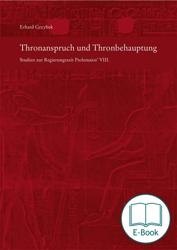 E-book 8.7 MB
The long reign of Ptolemy VIII, who ruled over fifty years from 170 to 116 BC is an era of irreversible decline for the Egyptian kingdom. This sovereign was confronted with serious economic, social and political problems and had from the beginning to defend his kingship against his younger brother and his sister. He requested help from the Romans, who intervened in the Greek world since the beginning of the second century BC, and concluded with them an alliance after his accession to the throne in 168.
The aim of this book is to grasp and to explain important events of a time that has both attracted and challenged scholars for more than a century, on the one hand because it irreversibly led to the end of the Ptolemaic kingdom and is therefore historically important, and on the other side because the sources from which we know this period are relatively few and often ambiguous and debated. The central part of this study is devoted to the most famous and controversial document in the reign of Ptolemy VIII, i.e. his testament by which he bequeathed his kingdom to the Romans in 155 in case he should die without descendants. Scholars have given to this testament, by which Ptolemy sought protection against his brother and his sister, so great an importance that innumerable interpretations were proposed. Only the most essential of these interpretations were summarized in this study and some clauses of the document have been reinterpreted and its historical importance explained.
Five studies are added to the book. In the first, the chronological order of the much debated events of the year 145 BC is examined ; - the second bears on two reliefs in the temple of Horus in Edfu, illustrating dynastical propaganda in the religious domain ; - the third comments on an exchange of letters of 131-130 BC revealing the correlation between money and power ; - the fourth is tentative interpretation the so-called Oracle of the Potter and the last contains an attempt to date the death of Ptolemy VIII.
On the whole, this book provides a rather favorable portrait of a person who was often discredited by ancient authors.

Erhard Grzybek was born in 1939 in Hohenstein (Oriental Prussia). He studied Ancient History, Egyptology and Coptic language and literature. He received his PhD in 1987 from the Faculty of Humanities at the University of Geneva with his thesis Du calendrier macédonien au calendrier ptolémaïque. Problèmes de chronologie hellénistique. From 1982, he taught Ancient History at the University of Lausanne and in 1991 was appointed Professor of Ancient History at the University of Geneva. Since 2004, he was President of the Société Internationale d'Etudes Néroniennes (SEIN). – He has published various contributions to the history of the Hellenistic kingdoms and of the Graeco-Roman East, as well as to the condition of the Jews under Roman authority.