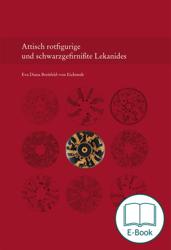 E-book 57.4 MB
Subject of the book is the cultural-historical significance of the lekanis produced in Athens in the 5th and 4th century BC, reaching its zenith in the first half of the 4th century BC. Investigated are function, shape development, workshops, iconography, and the dissemination of this vessel shape, which served as a cosmetics container as well as tableware and was exported to the entire Mediterranean and Black Sea region.

The subject of the investigation presented here is the vase shape conventionally known as lekanis. The cultural-historical significance of this vase in the 5th and 4th century BC is analyzed under the following aspects: function, shape development, workshops, iconography, and dissemination. The shape of this vessel remained largely unchanged, and it served as a container for cosmetics as well as tableware.
The importance of the lekanis in the ceramics production of individual Athenian workshops is examined. Single vessels also appear in the repertoire of important vase painters. It is not until the second quarter of the 4th century BC that a specialization in this vase shape by a painter or, respectively, a group of painters can be verified; simultaneously, it becomes a «bulk commodity» produced in larger workshops, which standardize the format, the ornamentation, and the depictions. After the middle of the 4th century BC, with a declining production, individual painters, probably working in smaller workshops, can once again be identified.
Until the end of the 5th century BC, the iconography – sometimes with unique themes – is diverse. Then, a concentration on a few pictorial themes sets in: images from the female domain, depictions of women, erotes, youths, griffins, and oriental heads. The development indicates that the lekanis was preferably used in the «women’s quarters» or, respectively, as a container for cosmetics. Since with the increased production of lekanides the manufacture of pyxides declined, the lekanis probably replaced the pyxis. The lekanis was not, however, a wedding vessel per se, as is frequently claimed in the literature.
The distribution of the lekanis in the Mediterranean and Black Sea region is discussed in detail in the last chapter. In the export regions, lekanides were popular not only with the Greeks but with the locals as well, who considered them also as prestige objects, as finds from graves of the nobility and the indigenous upper class attest. The reason for the wide dissemination of the lekanis could be its multi-functionality. Only in South Italy, a specific choice of pictorial themes – with a preference for unusual myths – can be observed. In Sicily, North Africa, Cyprus, and the Near East, the iconography apparently did not play much of a role, since mainly black-glazed lekanides were exported to these regions.
By recording more than 1000 lekanides and investigating the development of the vessel shape, its iconography, and its export, reliable results offering a long-term basis for future research were obtained. Most of the material originates in the 4th century BC, a period that in the last few years has once again received more attention in the research of ceramics.

Born 1956 in Wiesbaden. 1975: matura at the Humanistische Kurfürst-Friedrich-Gymnasium in Heidelberg; 1975-1976: studies in Economics, followed by studies in Classical Archaeology, Ancient History and, at first, Art History, then, since summer semester 1980: Prehistory and Protohistory at the Ruprecht-Karls-University in Heidelberg. 1989: relocation to Athens/Greece. 1995: final university degree with a doctorate in Classical Archaeology. Since then: free-lance work editing and lay-out of scientific books as well as translations. Research focus: Greek ceramics.