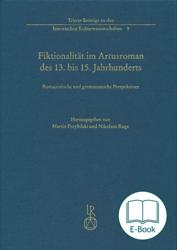 Preface 25.1 KB
Contrary to former studies the volume focusses on the opportunities of fictional world concepts in the Arthurian narrations of the European Middle Ages apart from the factitive dictate. It examines phenomena of narration that opened spaces of story-telling to French and German premodern literatures but are sealed to temporary educated literature.

The volume focusses on the French and German Arthurian Romances from the 13th to the 15th century; the articles mostly hearken back to an interdisciplinary symposium at the Historisch-Kulturwissenschaftliche Forschungszentrum Trier in September 2011. The controversial research about the content and the specific character of fictionality-concepts in the Arthurian Romance is, as is known, not new. It was coined crucially by the postulate that fictional world concepts of the premodern vernacular literature are only conceivable in a causally bound system of perceptions and values embedded in the idea of the observable and divine legitimized reality outside of the literature. Fictionality appears accordingly as a mediated institution, so to speak as a secondly ranked knowledge space. Opposed to that, in this volume the opportunities of fictional world concepts apart from factitive rigor, coherence or contingency that are especially prominent in the younger Arthurian Romance are being explored. Fictional narration is seen as an instrument to open up agitation spaces far beyond a narrative logic that is related to knowledge of the world outside of literature. So the volume enriches a debate that has taken place in the Medievalism-Philologies for a long time by examining marginally treated phenomena of narration in a genre of vernacular literature in the European Middle Ages.