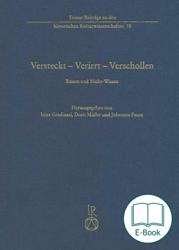 E-book 20.1 MB
Since the Early Modern Period, traveling becomes a central strategy enhancing knowledge. At the same time, travel seems to deliver a gateway for the incalculable and unfathomable. Contributions to this addition seek to explore how this type of non-knowledge appears in travelogues and travel fiction in literature, film, and art. Those investigations can show the aesthetic and epistemic dimensions of non-knowledge. As travel is conceptualized both as a medium and a poetical figure reflecting upon knowledge processes this publication will enrich the discussions on theory of knowledge as well as on travel writing.

The present addition observes the intricate connection between travel and non-knowledge in travel writing, film, and art. At the latest, by the Early Modern Period, traveling becomes not just a central strategy acquiring, authorizing, and questioning knowledge but also a gateway of non-knowledge. Though, the theoretical or practical frontier crossing into the unknown confronts travelers with experiences which cannot be integrated into existing registers of knowledge. The ways of dealing with this non-knowledge are manifold. It can be identified as own ignorance or as foreign, incomprehensible ‘other’ knowledge which is explicitly excluded. It can take shape as aesthetic and mystical experience in works of art and literature or it can be processed as unfathomable and traumatic incident revealed between the lines.
Representing non-knowledge is highly dependent on the kind of the respective travel and media, genres and aesthetics of travel depictions. The contribution seek to give space to this nexus: Subject of investigation are travelogues and travel fiction, maps and expedition films, feature films and paintings, as well as video art, and postcards of travelers. Further more the articles focus on different forms of travel. They analyze journeys of exploration whose protagonists are on the search for the New World, treasures, adventures, or confirmation of their scientific presumptions and on the way discovering unexpectedly ‘other’ knowledge, getting lost, or missing. They also deal with the figure of the vagabond for whom traveling becomes an end in itself or an experiment for gaining new experiences and aesthetic practices to express non-knowledge. Further contributions are occupied with pathfinders who take a fresh look from afar onto the already known to uncover hidden connections. They might be entangled against their will into crime investigations or have a war-related need to travel.
As this publication conceptualizes travel as both a medium and a poetical figure reflecting upon knowledge processes it will enrich the discussions on the theory of (non)-knowledge as well as on travel writing.