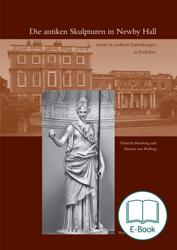 E-book 200.2 MB
The sculpture gallery of Newby Hall ranks among the most prominent collections of Antiquities in private ownership. It has remained nearly intact in the way it was first set up in 1764. Its standing is mainly owed to the high quality of the 69 statues, busts and reliefs in comprises of. Although the significance of the statues has been emphasized in archaeological literature since the 19th century, an adequate judgment of the pieces is made possible by this new catalogue only now.
The publication treats 137 antique objects in Newby Hall and in seven further English collections in private ownership. Until now, some of them have been published just in an unsatisfactory way, some have not been published at all. The present monograph presents for the first time a photographic documentation of all pieces. Special focus is put on the provenance of the objects which was traceable in many cases. A thorough introduction therefore deals with the history of the acquisitions and the concept of presentation in the 18th century.
Henner von Hesberg, now first Director of the Rome Department of the German Archaeological Institute, previously held professorships at the Institutes for Classical Archaeology at the Universities of Munich and Cologne.

Dietrich Boschung holds a professorship at the Institute for Classical Archaeology at the University of Cologne.