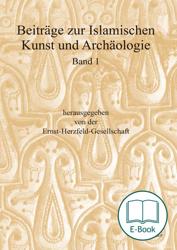 The contributions in both sections show the variety of themes and the geographical range of art historical and archaeological research that is envisaged by publications of the Society. They include research based on fieldwork and relating to art and architectural history, epigraphy and literature. In chronological scope, they reach from the early Islamic to the modern period including glimpses on 19th-20th-century repercussions of historical forms of Islamic art. The geographical range stretches from the Iberian Peninsula as far as China. The subjects relate to objects and monuments from the cultures of Western and Central Asia as well as to archaeological finds taken to Western museums and architectural forms adopted by European eclecticism. Last but not least, Volume 1 as the inauguration volume of a series edited by the Society, includes also biographical studies on the work and artistic talent of its patron of name, Ernst Herzfeld.

The section relating to the First Colloquy includes papers on finds made by Herzfeld in Samarra, epigraphy from a mosque in China, Indian architecture from Delhi, and new findings on architecture in Spain and from excavations in Syria. The reader learns about orientalizing architecture of the Bavarian King Ludwig II, the use of decorative forms taken from Islamic art, and objects in German collections. The section relating to the Second Colloquy introduces recent research in Spain and provides contributions on architecture in India and Central Asia. An essay tackles the adoption of aesthetics of Islamic art in 19th-century European art.

It is an important aspect of this series, that it offers an adequate fore also to younger scholars from disciplines concerned with the art history, the architecture and the archaeology of the Islamic world. Moreover, it is a fore that allows different languages as just another way of furthering an international exchange of research on Islamic culture, which is pursued along different traditions in the countries of Europe.