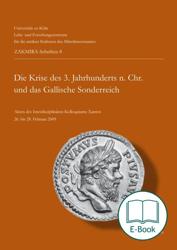 E-book 17.8 MB
The present volume is based on an interdisciplinary colloquium of the Archaeological Institute of the University of Cologne and the “Centre for Mediterranean Cultures”. The aim was to examine the region quite different critical development of the 3rd Century in the Rhine and Danube and its inpact, which led to the formation of the “Gallic Empire”. Classicists, historians and archaeologists will present and discuss selected aspects of the topic in current form.
In the provinces along the Rhine and Danube, especially in traditional forms of Upper Germany and Raetia theme “Crisis of the 3rd Century” and the “limesfalling” a steady focus on the ancient history and archaeological research. It comes with the preparation and evaluation of the archaeological material increasingly expressed that the impact of these critical developments can be quite varied regionally gone before him. Especially from Lower Germany were important impulses of utmost importance for the understanding of the barbarian invasions along the Rhine and Danube. This is especially significant to the formation of the so-called “Gallic Empire.”
Able from these more local issues emanating from the deliberations was excited to host an interdisciplinary conference on the topic, the classicists, historians and archaeologists discuss selected aspects of the issue presented in current form. This took place from 26 to 28 February 2009 at the LVR-Römermuseum Xanten. Jointly organized by the Department of Archaeology of the Roman Provinces on the Archaeological Institute of the University of Cologne (also for “Centre for Mediterranean Cultures”) and the LVR-Römer Museum and the LVR Archaeological Park Xanten.
Thematically, the event has focused on the regions on both sides of the Rhine, including Raetia, only in the direction of barbarian and a special issue of economic history (paper E. Harsanyi) has been interfered some more.
The interdisciplinary cooperation of ancient historians, classical scholars, archaeologists and numismatists have in our Cologne “Centre for Mediterranean Cultures” worked well, they will continue with this band. In the selection of invited speakers, there was also important to offer younger colleagues a possibility present new research results.