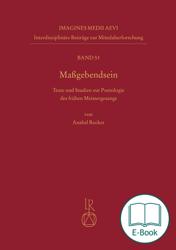 E-book 1.4 MB
Only by the beginning of the 16th century, the „Meistergesang“ develops explicit poetics of rules. In the early anonymous “Meistergesang” of the 14th and 15th century, poetological contemplations are exclusively expressed by the singable scripts themselves. The present study edits and analyses “Bare”, that address poetizing and lead to the identification of generic, linguistic and metaphoric features of poetology.
There is no evidence for explicit vernacular poetics within the early “Meistergesang” of the 14th and 15th century. While institutionally organised “Meistersinger” created a normative literary genre by using tablatures, the poetology of the early anonymous “Meistergesang” can only be deduced from the poetry itself. The normativity of poetological compositions rejects the idea of a notional standard. This abstract norm, which is versified in the poem or rather extracted from it, is replaced by the poem itself. The present study edits and analyses “Bare”, created between 1350 and 1520, that incorporate several forms of reflection such as poetical language, the idea of poets as craftsmen, artworks of versification, or content specific types of “Lieder”. By proper editing, the study aims to render the early “Meistergesang” more accessible, comprehensible, and applicable to categories. Moreover, the goal is to label the early “Meistergesang” a distinct part of the “Meistersinger” tradition. As a result, the study identifies generic, linguistic, and metaphoric features of the “Meistergesang’s” poetology.
Anabel Recker (*1986) studied german philology and philosophy in Münster and Hamburg. In 2018 she completed her PhD in German medieval studies at the Universität Hamburg. Since 2019 she works as a research associate at Georg-August-Universität Göttingen. Her research engages mainly in Sangspruchdichtung and Meistergesang, Scholarly Editing in Digital and Print and Middle Low German Literature.
This series, which will comprise doctoral and professorial dissertations and other monographs as well as collective volumes, aims at highlighting and promoting interdisciplinarity in Medieval Studies even more than is currently the case. Works from all branches of Medieval Studies will be accepted, provided they emphasise the aspect of interdisciplinarity, i.e. they attempt to transgress the boundaries of any single subject.