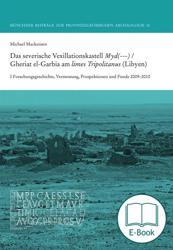 E-book 30.7 MB
In 2009/10, four seasons were conducted in the Roman fort located 280 km south of Tripoli. The focus of the interdisciplinary project, funded by LMUexcellent, was the fort, built above an oasis for a legionary vexillation around AD 200. The garrison performed control and surveillance tasks and was responsible for the security along the caravan route to the Fezzan. The history of research in the Tripolitanian frontier zone (limes Tripolitanus) from 1819-1996, the geodetic survey of Gheriat el-Garbia and its surroundings based on radar data from the German earth observation satellite (TerraSAR-X) and the Roman surveying scheme of the fort are presented. The architectural elements provide information about the sophisticated architectural design of the Severan fort. The ceramic survey, the coins and the radiocarbon analyses (14C) provide information on the history of the fort and its occupation not only in the 3rd century, but also on the dating of the reoccupation and restoration of the fort in Late Antiquity.
The Roman fort of Gheriat el-Garbia is located 280 km south of Tripoli in the pre-desert, above an oasis, on the central route to the land of the Garamantes. Along with Bu Ngem and Ghadames, it is the largest of the three new vexilliation forts of the limes Tripolitanus, advanced far to the south under emperor Septimius Severus. At the latest by autumn AD 201 its defences were finished by a detachment of legio III Augusta from Lambaesis. Since the English surveys (1953, 1981), the fort with its spectacularly well-preserved main gate has provided a valid basis for architectural reconstructions of 3rd century forts.
Within the framework of the interdisciplinary project of the Archaeology of the Roman Provinces at the University of Munich, funded by the Excellence Initiative, two campaigns each year were conducted in 2009 and 2010. The focus was laid on surveys and excavations within the fort, which was overbuilt by a Berber village (gates, headquarters building, barracks), and in one of the sanctuaries. In addition to scientific investigation methods (geodesy, geophysics, archaeometry, radiocarbon analyses), terrestrial 3D laser scanning was used. The ancient place-name Myd(---) is recorded on a pedestal for a statue. Surprisingly, in addition to the occupation of the fort until AD 275/280, there was a late antique reoccupation: from AD 390/400 until the middle of the 5th century, a unit of limitanei, the milites munifices, was garrisoned in the castra Madensia of the Notitia Dignitatum Occ. XXXI 30.
The first volume presents the history of research in the Tripolitanian frontier zone in north-western Libya and southern Tunisia from 1819 to 1996, as well as the location of Gheriat el-Garbia. This is followed by the geodetic recording of the topography of the fort and temple plateau based on radar data from the German earth observation satellite TerraSar-X. The focus is on the archaeological surveys: numerous architectural elements from the interior area of the fort result in seven orders of columns, which suggest a sophisticated architectural decoration of the central buildings of the fort. The extensive material from the ceramic survey provides information on the supply of the garrison with African red slip ware and cooking wares as well as with wine, olive oil and fish preserves transported in various types of amphorae. In addition, bronze small finds, coins and radiocarbon analyses are presented; the latter form the basis for dating the resto-ration of the fort between AD 390 and 425.
Michael Mackensen (*1949) studied Archaeology of the Roman Provinces, Prehistory and Ancient History at Munich, Freiburg and Oxford from 1969 until 1977. After his MA (1974), PhD (1977) and a travel scholarship granted by the German Archaeological Institute/DAI (1977/78) he participated in excavations of the DAI at Carthage (Tunisia) and Resafa (Syria). From 1982 to 1994 he was research assistant at the Bavarian Academy of Sciences conducting excavations in Bavaria (e. g. Nersingen, Kellmünz) and a survey project at El Mahrine (Tunisia). In 1991 he submitted his habilitation thesis and then became Professor for Archaeology of the Roman Provinces at the Ludwig-Maximilians University of Munich in 1994. He carried out various field projects in Bavaria (2001–2007 Burghöfe), Tunisia (1998/99 Chemtou), Egypt (2001/02 Deir el-Bakhît; 2005–2017 Nag al-Hagar) and Libya (2009/10 Gheriat el-Garbia, LMUexcellent-Project limes Tripolitanus). In 1989 he was allocated with the Kurt-Bittel-Preis für Süddeutsche Altertumskunde, in 2010 with the Preis für gute Lehre des Freistaats Bayern and in 2013 with the LMU Lehrinnovationspreis. In March 2015 he was retired.