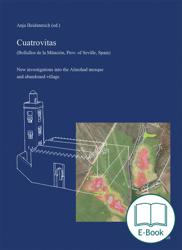 New investigations into the Almohad mosque and abandoned village

E-book 112.6 MB
The publication presents an investigation into rural settlement archeology in the hinterland of Almohad Seville. Many available methods from different disciplines were used for illustrating the past of Cuatrovitas. The informations are combined with 300 very explanatory figures and the entire documentation of the archaeological trenches.
The Islamic desert of Cuatrovitas is a case study of the planned expansion of a rural settlement including the construction of a mosque under the Almohads, and its survival under Christian rule. In a cooperative project between the universities of Bamberg, Huelva and Seville, the medieval reality of life away from the nearby capital Seville was reconstructed using interdisciplinary research methods. From an archaeological-historical perspective, the publication offers a wide range of exemplary information not only for the study site itself, but also for the surrounding cultural area of the so-called El Aljarafe.
Anja Heidenreich studied medieval and modern archaeology, European ethnology and Islamic art and archeology in Bamberg and Berlin. Her publications cover historical-archaeological topics from sites in Germany, Spain, Syria and Iran. She has been teaching at the Chair of Islamic Art History and Archeology of The Bamberg University for many years and is primarily concerned with archaeological materials and investigations on the medieval history of Islamic Spain.