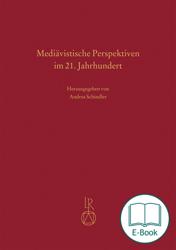 E-book 9.0 MB
The Festschrift includes many papers of national and international students, colleagues and friends of Ingrid Bennewitz about her many research and work interests: middlehighgerman lyrc poetry, gender studies, medievalism and history and perspectives of medieval studies.
The Festschrift for Ingrid Bennewitz offers numerous contributions by national and international former students, colleagues and friends of the jubilarian on her diverse research and work interests: The focus is on Middle High German song poetry with studies on Frauenlob, Regenbogen and Oswald von Wolkenstein; gender studies on characters from Heinrich von Veldeke's 'Eneasroman' and the Karlsepik up to Hans Sachs and Johannes Spreng; reception research with contributions on reception processes in the Middle Ages and on medievalism – on transmission relationships and media change, on text and subject, for example, of 'Parzival' or a historical figure such as Saladin, or on the history of motifs in the context of anti-Semitism, on medievalism in Romanticism, on the reception of Walther von der Vogelweide or Brünhild, on modern authors such as Ludwig Tieck, Anita Pichler and Peter Handke, on medieval reception in audio media, in Brazilian Literatura de Cordel and on the Middle Ages and medievalists in film; on the situation of the subject in the past and present, for example on the basis of teaching plans at universities in Canada and the USA, Germany and Austria as well as at schools, the history of the edition in German medieval studies or the advantages and dangers of digitisation for research and teaching. This potpourri not only ties in with the professional and university-political achievements of Ingrid Bennewitz, but also demonstrates the virulence of the questions and investigations and thus, not least, once again the relevance of German Medieval Studies itself.
Andrea Schindler:
Born in 1974; studied German language and literature, theatre studies and music education at the universities of Erlangen and Bamberg; doctorate in 2009; since 2017 member of the academic staff at Saarland University. Main areas of research: courtly literature of the High Middle Ages, medievalism in modern culture.