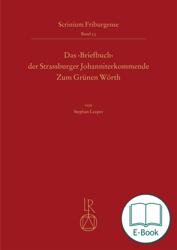 E-book 400.5 MB
The 'Letter Book' served as the basis for the formation of a community identity in the monastery Zum Grünen Wörth. What is unusual about this manuscript are the two conversion texts declared as autographs, the 'Four Years' of the founder Rulman Merswins and the 'Five Men's Book' of the (fictitious) friend of God in the Oberland, who acts as co-founder of the monastery. The new edition and first complete edition of the 'Letter Book' is introduced with studies on the palaeographic and codicological peculiarities of the manuscript and with a historical contextualisation. The picture cycle of the 'Master's Memorial' intended for the German Prior of St John is also analysed for the first time, of which the 'Letterbook' contains the accompanying title poems.