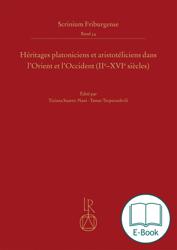 E-book 1.1 MB
The aim of bringing together these works in this volume is to explore, through specific studies, the reception of certain aspects of Neoplatonism and Aristotelianism in Patristics and the philosophy of Late Antiquity, in medieval Latin thought and in medieval Georgia (especially with Ioane Petritsi), as well as with certain Renaissance authors. This volume thus provides new and stimulating insights to broaden our understanding of the impact of the two great currents which mark Western philosophy.
This volume, which brings together contributions from several scholars of ancient and medieval thought, aims to explore the reception of Neoplatonism and Aristotelianism in Western philosophy during the extensive period between the second and sixteenth centuries: in Greek and Latin patristics (Valentinian Gnosis, Augustine of Hippo, Method of Olympus, Theodore Studite), in the Greek philosophy of late Antiquity (Plotinus, Ammonios), in the thought of the Latin Middle Ages (Thomas Aquinas, Henry of Ghent, Meister Eckhart) and medieval Georgia (Ioane Petritsi), as well as among certain Renaissance authors (M. Ficin, F. Patrizi, F. Suarez). This collection does not aim to provide an exhaustive vision, but instead offers specific, new and stimulating insights through the study of aspects, concepts or particular elements that illustrate the various facets of the reception of the two great philosophical currents. This volume also helps to overcome the temporal and geographical barriers that separate various eras and cultural regions in order to embrace a broader perspective and look at the long duration of Western thought. It thus allows a better understanding of the different forms and means of the translatio studii which has worked within philosophical culture and permitted its development on the European continent.
Tiziana Suarez-Nani
Professor Emeritus Tiziana Suarez-Nani (1956) was chair of medieval philosophy at the Department of Philosophy of the University of Fribourg (Switzerland) from 2002 to 2021. Her research focuses on metaphysics, philosophy of nature and epistemology of the 13th and 14th centuries.

Tamar Tsopurashvili
Tamar Tsopurashvili (1978) is professor of medieval philosophy at Ilia State University (Tbilisi, Georgia) and has been the director of S. Tsereteli Institute for Philosophy since 2014. Her research focuses on the history of metaphysics, medieval language theories and epistemology.