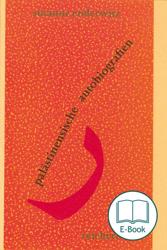 E-book 42.6 MB
The history of Palestine is one written by others, Roman and Arab conquerors, Ottoman and British rulers, and today a Zionist shadow looms. As if finally realizing that claims to territory demand a claim to history, following the defeat of 1967 some individuals began to write down their memories, a trend that has gathered apace in subsequent decades. These authors are not historians and they do not venture into the archives; they rely solely on their memory and many of them do not even live in Palestine. They share one thing: the hope that they will one day return. This hope is however not to be understood as a concrete physical relocation but rather a hope for the return of a Palestinian state. And this marks the second key date of this work: the year 2000, when these hopes were dashed.