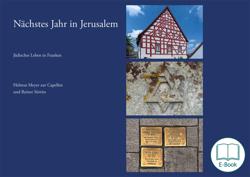 E-book 45.9 MB
"Next year in Jerusalem" is a wish, a vision of many Jews who live abroad, in the diaspora. Jews have been living in Franconia for 1000 years - tolerated, expelled, murdered - and they have always dared to make a new start. The traces they left behind in towns and small villages are varied. Impressive photographs by Helmut Meyer zur Capellen and explanatory texts by Reiner Sörrieswollen invite you to pay attention to the evidence of Jewish life from the Middle Ages to the present, which is not always immediately recognizable.
Reiner Sörries, born in Nuremberg in 1952, is a pastor, professor for Christian archeology and art history at the University of Erlangen and was director of the Museum for Sepulchral Culture in Kassel until 2015. In retirement he devotes himself primarily to Islamic and Jewish art. He lives and works in Kröslin on the Baltic Sea.

Helmut Meyer zur Capellen, born in Lüneburg in 1945, attended the Bavarian State School for Photography in Munich and graduated with a master's degree. For decades he worked as an advertising photographer and was a co-owner of an advertising agency. He has also worked as a photographer for international picture agencies since 1972. After retiring in 2007, he photographed e.g. Jewish tombstones for the Steinheim Institute, but also for various museums and cultural projects. He lives and works in Eckental in Middle Franconia.