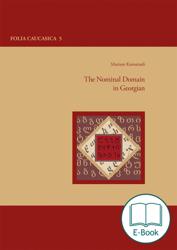 The Nominal Domain in Georgian

E-book 16.9 MB
The present book analyzes the nominal domain in the Georgian language in its diachronic development. In Georgian, the noun phrase went through crucial changes over the centuries on various levels -- morphological, morpho-syntactic, syntactic, semantic, and typological. The peculiarities of its structures are discussed and illustrated across all developmental stages of the Georgian language: Old, Middle and Modern Georgian. As its empirical basis, the study builds upon statistical accounts of corpus materials yielding insight into the structure of the Georgian language and its changes over time. In addition to the empirically-based analyses, several theories are reviewed (e.g., the issues of Middle Georgian being a developmental stage of the language in its own right or of Georgian being a DP-language) in order to contribute to determining the linguistic position of Georgian and to pave the way for further typological research.

The book deals with the formation of noun phrases (NP) in Georgian, the state language of Georgia, which is considered the most prominent representative of the South Caucasian (or Kartvelian) language family. Since Georgian - as the only non-Indo-European language of the Caucasus region - can look back on an uninterrupted written tradition of more than 1500 years (the oldest written evidence are inscriptions from the 5th century CE), it is ideal for diachronic analyses. A distinction is usually made between an Old Georgian (approx. 5th - 11th century), a Middle Georgian (approx. 12th - 18th century) and a Modern Georgian period (since the 18th century). The work can be roughly divided into four main chapters: 1. Old Georgian, 2. Middle Georgian, 3. Modern Georgian and 4. The DP (determiner phrase) hypothesis. The first chapter, which examines the structure of NPs in Old Georgian, includes I.A. the analysis of the article function of postpositioned demonstrative pronouns (for the function of the definite article) and the postpositioned numeral ‘one’ (for the function of the indefinite article), which mostly occupy a Wackernagel position in the noun phrase. As a further special feature, the phenomenon of "suffixaufnahme” analyzed, in which an attributive noun (in the genitive) receives the marking of the head noun in addition to its own case marking. Finally, the possible influence of Ancient Greek and Classical Armenian is examined by comparing passages from the Bible with regard to the structure and composition of the NPs. The second chapter begins with the question of whether Middle Georgian should be considered a developmental stage of the Georgian language in its own right and discusses various opinions and arguments of linguists in this regard. Concerning the NP structure, this chapter examines particularly the question of the development of the article functions and of “suffixaufnahme”. All questions in this chapter are accompanied and explained by statistics from the Georgian National Corpus (GNC). The third and largest chapter deals with Modern Georgian, offering a very detailed insight into the language and its peculiarities. Among other things, the different varieties, functions and uses of demonstrative pronouns, possessive pronouns, indefinite pronouns (in the context of specificity), quantifiers, adjectives, participles and genitive nouns are illustrated. Finally, the last chapter examines the topic of definiteness by applying various NP/DP parameters to Modern Georgian.