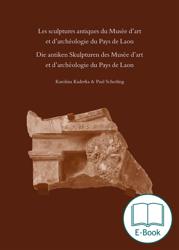 E-book 22.4 MB
In the latest volume of the MAR catalogue series the ancient sculptures of the Museum of Laon (France) are presented for the first time in their entirety. The catalogue consists largely of the collection assembled by Paul Marguerite de la Charlonie (1844–1921) and includes Greek and Roman exhibits from the Archaic period to late antiquity. The extremely rich inventory includes Cypriot kouroi, Hellenistic rulers, portraits of Roman emperors, Attic grave reliefs, and Roman sarcophagi. All objects were documented by Gisela Geng, photographer-in-chief of the Research Archive for Ancient Sculpture (Cologne), and are presented in detail in German- and French-language catalog articles.
For more than half a century, The Research Archive for Ancient Sculpture at the Archaeological Institute of the University of Cologne has documented little-known collections of Greek and Roman sculptures through high-quality photographs and their publication in the Monumenta Artis Romanae series. The present volume is an addition to this series and presents the ancient sculptures of the Musée de Laon. They originated with one of the most important French private collections of the early 20th century which has been in the museum's possession since 1937.

The outstanding characteristic of this collection lies in the quality of the sculptures, as well as in their diversity and their state of preservation. The focus of the collection is in works from the eastern Mediterranean, especially, Greece, Asia Minor and Alexandria. The original Greek sculptures range from a male cloak figure, dating back to the 6th century, through grave reliefs and god images from the 4th century BC, and extend to late Hellenistic works. The larger-than-life head of a Hellenistic king is of particular importance; portraits and a

Most of the collection was assembled from the Parisian art trade by Joseph Eugène Paul-Marguerite de la Charlonie (1844–1921). In terms of origin, composition and state of preservation, it is similar to other contemporaneous sculpture collections in Europe and the USA. In contrast to the European antique collections of the 17th and 18th centuries, only sparse additions were subsequently made to the pieces which enhances its value and importance.

The catalogue is a result of a collaboration between French and German archaeologists, and provides an extensive material presentation of individual works and their photographic documentation. While carrying out fundamental archaeological research, it also seeks to contextualize the art works with particular attention to the provenances of the pieces.

Karolina Kaderka is a research administrator at the École Pratique des Hautes Études (EPHE) in Paris. After studying Classical Archaeology, Archaeology of the Roman Provinces and Ancient History in Prague and Munich, she received her doctorate in 2012 with a thesis on sculptural representations of urban Roman temple pediments, in a cotutelle between EPHE Paris and Technical University Dresden. Her scholarship focuses on the ancient sculpture and art and archaeology of Roman temples. She is currently engaged in research on the cultural and art transfer in antiquity as well as on anthropological approaches to the image and the interactions between image and space.