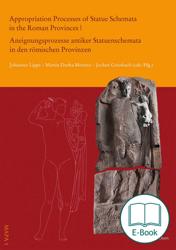 E-book 73.1 MB
The majority of ancient statues can be typologised on the basis of formal overlaps, i.e. arranged in 'schemes'. Individual statue schemes were handed down over centuries in ever new versions and integrated into different material, spatial and functional contexts. These processes of reception and transformation can be understood as cultural appropriations that were aesthetically, politically and/or religiously motivated. As a rule, they presupposed education and thus also had a social component. Often, however, purely practical reasons such as the availability of a certain form led to the reproduction of anthropomorphic figures according to a scheme. In the process, the pictorial works could preserve the former contexts of meaning of their models, only partially adopt them or ignore them and 'overwrite' them with completely new meanings. This volume, which is the result of an international conference in Tübingen, brings together contributions that discuss the above-mentioned processes of reception in individual centres and regions of the Roman Empire.
Johannes Lipps holds a chair of Classical Archaeology and is fellow at the Gutenberg Research College at the Johannes Gutenberg-Universität at Mainz. He studied Classical archaeology and ancient history in Marburg, Rome, Bonn and Cologne. He completed his PhD in 2008 at Cologne, which was followed by an assistant professorship at LMU Munich from 2009–2014 and a junior professorship at Tübingen from 2014–2019. His research interests concern architecture, urbanism and sculpture especially in ancient Rome and the provinces. Most recently, he published the monograph Die Stuckdecke des Oecus Tetrastylos im sog. Augustushaus im Kontext antiker Deckenverzierungen (Rahden/Westf. 2018).

Jochen Griesbach is director of the Collection of Ancient Art in the Martin von Wagner Museum of Würzburg University since 2014. He studied Classical Archaeology, Latin and Studies of Drama, Film and TV at the universities of Cologne, Bonn, Heidelberg and Berlin (FU). His PhD thesis completed at the University of Cologne (2006) analysed the relationship between Roman villas and tombs in the surroundings of Rome. In 2011, during his assistant professorship, followed a habilitation treatise about the topography of honorific statues in Hellenistic Greece and Asia Minor at the University of Munich (LMU). His fields of research range from ancient cities and burial customs to visual culture with a particular interest in portraits. Since 2016 he is chief organizer of a research project dedicated to the marble and limestone sculptures originating from Apollonia (Albany).

Martin Dorka Moreno is Assistant Professor at the Institute of Classical Archaeology at Tübingen University. He studied Classical Archaeology, Ancient History, and Italian Philology at the Universities of Mainz, Heidelberg, and Berkeley (USA). His PhD was awarded by the University of Freiburg in 2016. In his thesis he analyzed the Imitatio Alexandri in images of Gods and Heroes in Graeco-Roman antiquity. From 2012 to 2016 he was an academic member of the Collaborative Research Center 948 Heroes – Heroizations – Heroisms at the University of Freiburg. His current focus lies on the ›Zeitgesicht‹ (“period face”) in Roman private portraits from the City of Rome and the sculpture production of the Roman North-West Provinces. His research interests include ancient sculpture, Roman portraits and ancient visual culture.