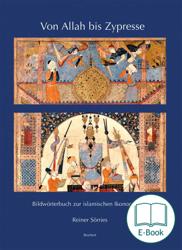 E-book 38.0 MB
The alleged Mohammedan image ban is opposed by a diverse Islamic world of images, which knows religious and profane scenes as well as mythological and symbolic motifs. They are opened here for the first time systematically and for all art genres. The lexical section from A to Z is complemented by explanations of the temporal and geographical focus of Islamic imagery. In addition, the most important cultural and literary sources are presented. This Islamic iconography is designed as a picture dictionary with numerous pictorial examples.
Despite the Islamic ban on images, the validity of which has been widely discussed, the Islamic world knows a large number of images from artistic book illumination to posters on streets and house walls. The present book is dedicated to the development of this world of images from its beginnings to the present and has three parts. In the introductory part, in addition to discussing the ban on images, the cultural and literary sources of Islamic iconography, the chronology and localization of the Islamic world of images as well as the genres of art in which images appear. The second (main) part reveals the most important contents of Islamic iconography from A to Z. In the final third part, iconological discussions take place using selected examples. On the one hand, the contrasts between the image-friendly Persian (Shiite) and the more image-abstinent Arab (Sunni) attitudes and, on the other hand, the overlap with Asian and Western art are taken into account
Reiner Sörries, born in Nuremberg in 1952, is a pastor, professor for Christian archeology and art history at the University of Erlangen and was director of the Museum for Sepulchral Culture in Kassel until 2015. In retirement he devotes himself primarily to Islamic and Jewish art. He lives and works in Kröslin on the Baltic Sea.