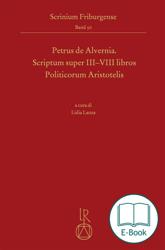 E-book 607.3 MB
This is the first critical edition of the most significant medieval commentary on Books III-VIII of Aristotle’s Politics. This commentary was intended as a continuation of Thomas Aquinas’s literal commentary on Books I-III of the Politics. It was highly influential and was regarded as the standard commentary on Aristotle’s Politics until the late sixteenth century. The volume includes the analysis of both the medieval manuscript tradition and the printing history of this text, and offers an account of Peter of Auvergne’s “political thought” advanced in his philosophical and theological works. It contains also an edition of Books III-VIII of William of Moerbeke’s Latin translation of the Politics.
This volume contains the first critical edition of the Scriptum super III-VIII libros Politicorum by Peter of Auvergne as well as a pragmatical edition of Books III-VIII of the medieval Latin translation of Aristotle’s Politics. Intended as the continuation of Aquinas’ unfinished commentary on the first three books of the Politics, the Scriptum became—together with Aquinas’ commentary—the commentary on the Politics. From its appearance in the late thirteenth century to the end of the sixteenth century, the Scriptum represented the most authoritative and influential interpretation of Books III-VIII of the Politics.
The introduction to the volume provides both an overview of Peter’s political thought and a case study of the production and dissemination of a university text. An examination of the manuscripts traces the preparation of the text from its first transcription and revision by a scribe close to the author—if not the author himself—to the preparation of the finished exemplar and its diffusion through the system of peciae. The introduction also explains how the text was adapted to fit the standards of humanistic Latin when it was first printed in the fifteenth century: its language was adjusted to humanistic standards, many formulations were reshaped, and passages were suppressed. These changes were subsequently preserved in all later editions of the text. Freed from this humanistic patina with which it has been transmitted since the early age of printing age, the Scriptum is now restored to its original version.