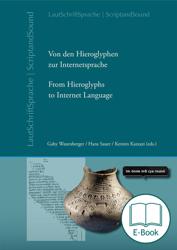 From Hieroglyphs to Internet Language: The Relation of Script, Sound and Language

E-book 6.6 MB
The contributions concentrate on the spelling of some Indo-European languages and the relation of writing and pronunciation; in particular they deal with: (I) the use of cuneiform letters in Hittite and of hieroglyphs in Luvian; (II) writing systems and phonological systems in Germanic languages, partly in the form of a general survey and partly and more specifically the rendering of i-umlaut in Old English, Old High German and Old Norse, as well as spelling peculiarities in the Gawain manuscript; (III) development, use and different forms of runes in Old Norse and Old English; (IV) games and their names in Old Norse, as well as computer games and how they have changed the spelling of English.
Gaby Waxenberger is an associate professor and teaches at the Department of English and American Studies at LMU Munich (Ludwig-Maximilians-Universität). She has also taught at the Catholic University of Eichstätt-Ingolstadt and in London. Moreover, she is part of the long-term project RuneS (Runic Writing in the Germanic Languages), funded by the Union of the German Academies of Sciences and based at the Academy in Göttingen. Since 2015 she has been a member of the Agder Academy of Letters and Sciences in Kristiansand, Norway. Her major reseach interests lie in the field of runology and historical linguistics but she is also interested in Old English and early Middle English literatures as well as in American and Australian English.

Kerstin Kazzazi studied Indo-European Linguistics, English Linguistics and Medieval English Literature, and English Literature at Munich University (LMU). She wrote her PhD thesis on “Words for ‘Man’ and ‘Woman’ in the Rigveda” (“Wörter für ‘Mann’ und ‘Frau’ im Rigveda”) and did a case study on family trilingualism involving interaction phenomena of German, English and Farsi. She was a research assistant at the Chair of German Linguistics at the Catholic University of Eichstätt-Ingolstadt as well as a researcher in the DFGfunded project on brand names (project leader: Prof. Dr. Elke Ronneberger-Sibold). Currently she is a researcher in the Academy project “Runic writing in the Germanic languages (RuneS)” in the research unit Eichstätt-Munich.