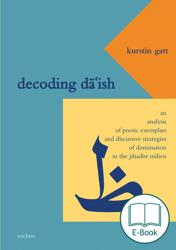 E-book 3.1 MB
Why do Jihadists compose poetry and what role does poetry play in the transmission of the jihadist ideology? Decoding DĀʿISH is located at the intersections of the literary, the religious, and the political in jihadist discourse. The study examines how the self-professed ‘Islamic State’ has twisted and manipulated the Arabic language, the classical Arabic ode, Islamic symbolism, traditions, and guiding myths to legitimate its political power and justify its violent policies. The discussion culminates in the analysis of Arabic poetry produced by the jihadist group by taking into consideration the socio-political context in the contemporary Iraq-Syria region. By drawing primarily upon numerous poems and chants, the author shows why our knowledge of the jihadist stream needs to be grounded in a thorough understanding of the cultural logics of mobilization, identity structures, and the belief systems and desires of these groups.
Literatures in Context is a peer-reviewed book series devoted to Near Eastern and North African literatures. The editors want the title of the series to be understood programmatically. They presuppose a concept of world literature that includes Near Eastern and North African literatures. What is more, they assume that literatures are in many ways marked by intertextuality, that they constitute readings of extremely diverse earlier texts, and that they are posited within a field of tensions, much broader than their respective national language. For the earlier eras of Near Eastern and North African literatures, this field of tensions geographically covers the regions of the Southern and Eastern Mediterranean and Asia Minor. In modern times, it has become a space of interaction that has long since included “global” Western literatures (and realities). This does not imply that the modern Near Eastern and North African literatures have severed themselves from their predecessors. Instead it is precisely the tension between different sets of references in modern Near Eastern and North African literatures, or their “local historical context”, which is a great part of their attraction, that remains a crucial field of research for the modern scholar.