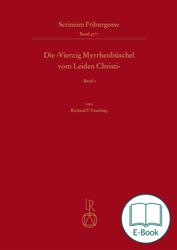 E-Book 2 4.3 MB
The Middle High German treatise ›Forty Bundles of Myrrh of Christ's Passion‹ combines traditional exegesis of the Song of Songs with detailed instructions for the correct contemplation of the Passion of Christ by means of fictive dialogues. The treatise, which was probably written for beguines in the first half of the 15th century in the Hospitaller commandery zum Grünen Wörth in Strasbourg, is analyzed and edited for the first time, in three parts divided into two volumes. The first part traces the function of the biblical passage Ct 1,12 within the exegetical tradition and examines the form and content of the ›Forty Bundles of Myrrh of Christ's Passion‹. In the second part, the surviving textual witnesses (eleven manuscripts and two copies of an incunable edition) are catalogued as accurately as possible and located within the context of the manuscript transmission. Finally, the third part offers the first edition of this extensive Passion treatise in an easily readable form and makes the most important variants as well as the different textual levels accessible through a critical apparatus.
The hitherto unstudied Middle High German treatise ›Forty Bundles of Myrrh of Christ's Passion‹ (VMB) was probably written in the first half of the fifteenth century in the Hospitaller commandery (zum Grünen Wörth) in Strasbourg. It is intended as a guide for beginners in the spiritual life to undertake appropriate contemplation of the Passion of Christ. To convey the knowledge gained from Christ’s exemplary suffering, different textual strategies are enacted on different levels. Following the Song of Songs 1,12 ((fasciculus myrrhae dilectus meus mihi inter ubera mea commorabitur)), an internal narrative demonstrates how the sponsa from the Song of Songs, who is interpreted as an allegorical personification of an exemplary imitator of Christ’s suffering, receives visions of the individual sufferings of Christ by means of the forty bundles of myrrh. In her affective compassion, the sponsa suffers Christ's sufferings with Christ and learns from the (verbum Dei) the meaning and benefits of the individual instances of suffering. This method of contemplation, in turn, is used in an instructional dialogue staged as a narrative framework in which a fictitious spiritual father teaches his spiritual children, who are eager to learn, and which at the same time guides the ideal attitude towards the reception and adaptation of the content transmitted.
The two-volume work is divided into three parts. The analytical Part A traces the function of the (fasciculus myrrhae) verse within the exegetical tradition, into which the VMB treatise fits seamlessly, and explores its form and content as well as the genesis and history of the text. In Part B, an analysis of the textual transmission determines group affiliations between the eleven known manuscripts and the two copies of an incunable edition of the VMB. Afterwards, the textual witnesses are described and contextualized with precise descriptions of their appearance and content, and both the texts transmitted alongside the VMB within these codices and the historical contexts in which the manuscripts were used are presented and evaluated. Part C offers the first edition of the VMB in an easily readable form, following the text in St. Gallen, Stiftsbibliothek, Cod. Sang. 603. A detailed critical apparatus lists the most important variants of the known textual witnesses.
The relatively wide distribution of the ›Forty Bundles of Myrrh of Christ's Passion‹, which was read mainly in the south-west of the German-speaking lands, in both male and female monasteries of different religious orders as well as in lay circles, proves the great popularity of the treatise. While conceptually taking up the well-known combination of the exegesis of the Song of Songs and instruction in the contemplation of the Passion, the treatise innovatively develops that instruction further by means of different textual strategies, and opens it up further to allow individual adaptation of the content by its recipients.
Richard Fasching studied German linguistics and literature, medieval history and church history at the University of Zurich. He wrote his dissertation in the project 'Texte und Bilder – Bildung und Gespräch. Medial Conditions and Functional Interferences' at the University of Freiburg/Switzerland, where he received his doctorate. He was scientific collaborator at e-codices, research assistant in the Parzival project (University of Berne) and coordinator at the centre of competence «Zürcher Mediävistik». Since 2020 he is a research associate in the Johann Caspar Lavater project at the University of Zurich and at Zurich's central library.