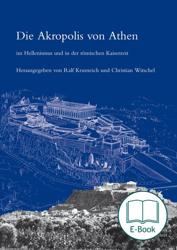 E-book 62.1 MB
In the Hellenistic and particularly the Roman Imperial period the Acropolis of Athens embodied the greatness of the “polis” in Classical times and must to an extent have attained a museum-like status. This volume represents the results of an International Colloquium at Bonn University which took place in June 2006. In their contributions scholars of Classical Archaeology and Ancient History treat subjects such as: buildings, votive offerings and honorific statues of the Hellenistic and Roman periods (and up to Late Antiquity), as well as the historical and political context and the well documented references to Athens’ glorious past in the development of democracy and in the age of Perikles.
The Acropolis of Athens is and has for centuries been a focal point of interest for both scholars and a broad public audience. Above all attention has been paid to the Archaic sculptures and to the great buildings of the second half of the 5th century BC, buildings which to this very day continue to form our picture of the Acropolis. By this approach two other important aspects tend to fade into the background. First, the temple buildings of the Acropolis did not stand isolated between large empty spaces. It was rather the case that the crag was strewn with small buildings and in particular with votive offerings and statues of all kinds, which must have presented themselves to the visitor in densely compact rows. Only a few of the sculptures themselves still exist, but we do possess a large number of statue bases with inscriptions and the traces of dowel holes for the fixation of statues on their upper surface, which offer material for archaeological and historical analysis. This material has indeed been evaluated for the “anathemata” of the archaic period and for the 5th century BC. But such an evaluation is still to a large extent lacking for the bases from later periods. And it is with this that the second neglected aspect is touched upon. The persistent use of the Acropolis in the post classical period, that is between the middle of the 4th century BC and the late 6th century AD, has hitherto received little attention - and this despite the fact that the Acropolis remained the most important sanctuary in Athens in the Hellenistic period as well in Roman imperial times. Intensive observance of the cult continued accompanied by corresponding rituals and forms of decoration and use. At the same time the Acropolis had become an important centre of remembrance, in which the glorious past of the “polis” was commemorated in ever changing ways. From these points of view the Acropolis of Athens still presents itself as an important field of study. A number of scholars have therefore formed a research group in order to investigate the honorific statues and the use of the Acropolis during the Hellenistic and Roman imperial periods. From the very beginnings particular attention has been paid to the many statue bases, which until now have been studied as epigraphic records, but scarcely documented and analysed as archaeological objects. In the framework of this project an International Colloquium took place on 16th and 17th of June 2006 at the Bonn University. This volume presents the results of that meeting - with discussion focusing upon the uses and decoration of the Acropolis in the post-classical period.
Ralf Krumeich

has been Full Professor of Ancient History at the Ruprecht-Karls-Universität Heidelberg since 2005. After studying at the Freie Universität Berlin and Oxford, he wrote a dissertation at Frankfurt a.M. University on the third century AD in the western half of the Roman Empire. In 2004 he completed his Habilitation at the LMU in Munich, working on the means and mechanisms of imperial representation in the Roman Empire. He has been employed as Assistant Professor at both the RKU Heidelberg and the LMU Munich. His current interests include Roman History (especially the history of cities in Late Antiquity), changes in forms of representation in the Roman Empire, statues in Hellenistic an Roman times, Latin epigraphy, and the end of Roman rule in the northwest provinces.