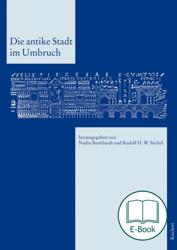 E-book 34.0 MB
This volume covers the conference “The Ancient City in Transition,” which was held in May 2006 in Darmstadt, Germany. The central theme is the change and design of urban space during Late Antiquity, a period particularly marked by upheavals. In dealing with the urban space, the questions of space design and change, of how to deal with older structures and their importance, of exploring new paths in the design of public and private living space, and of urban structural changes and site-specific developments of Roman cities were explored. Particularly significant here was the heterogeneous development generated in each city.