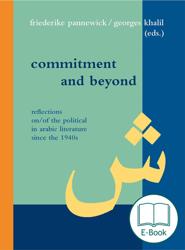 Reflections on/of the Political in Arabic Literature since the 1940s

Friederike Pannewick is Professor for Arabic Literature and Culture at the Philipps-Universität Marburg, Center for Near and Middle Eastern Studies (CNMS), and co-director of the research field “Travelling Traditions: Comparative Perspectives on Near Eastern Literatures” within the research program “Europe in the Middle East – the Middle East in Europe” (EUME) at the Forum Transregionale Studien Berlin and director of the research group “Figures of Thought | Turning Points. Cultural Practices and Social Change in the Arab World” at CNMS. She is co-editor of the series “Literatures in Context: Arabic – Persian – Turkish” (Reichert) and has published extensively on modern Arabic literature and theater.

Georges Khalil works at the Wissenschaftskolleg zu Berlin and is the Academic Coordinator of the Forum Transregionale Studien. He is also responsible for “Europe in the Middle East – The Middle East in Europe” (EUME), a research program that seeks to rethink key concepts and premises linking and dividing Europe and the Middle East. He was previously the coordinator of the “Working Group Modernity and Islam” from 1998 to 2006 at the Wissenschaftskolleg zu Berlin, and studied History and Islamic Studies in Hamburg and Cairo, as well as European Studies at the Europa-Kolleg Hamburg. From 1995 to 1996 he was fellow of the College for International Affairs, Robert Bosch Foundation.