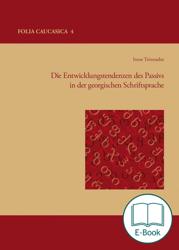 E-book 3.8 MB
This monograph analyses the grammatical, pragmatic, communicative and lexical-stylistic functions of different subgroups of synthetic dynamic passives in Georgian. They differ from the standard average European type, and the complexity of Georgian verbal diathesis is of a more general linguistic interest. In an introductory section, the book offers a detailed and critical review of the rich and relevant literature of the Georgian and other traditions. – On the basis of a vast corpus taken from a 1500 years old tradition of literary texts, several specific tendencies are established in the evolution of so-called affixed dynamic passives, and possible factors favouring these tendencies are considered. In this context, the evolution of the voice opposition from Old Georgian up to Modern Georgian is
analysed, in particular the relation between prefixed and suffixed types of the Georgian passive, and possible cases of influence of the dominant Greek source language on the use of morphological passives are verified in Old Georgian translated texts.
This book is a study of the so-called ‘dynamic’ synthetic passive and the tendencies of its development in the history of Georgian, the most prominent autochthonous South Caucasian (Kartvelian) language, which is of a more general interest: it has a 1500 years old written tradition and in many respects differs from the standard average European type, and its
system of verbal diathesis is particularly complex. Among the many remarkable typological features of Georgian, the passive deserves special attention. While the passive in the European languages can mostly or exclusively be regarded as a form of ‘conversion’ of corresponding transitive active forms, there is a very large number of passives in Georgian which are neither derived from actives nor even directly opposed to actives. The principle of ‘conversion’, i.e. of the transformation of active
sentences into passive constructions according to the model of traditional grammar, assumes that a given ‘direct object’ becomes a ‘subject’ and the underlying subject will be either eliminated or relegated into an adpositional phrase. While this process is relatively easy to describe in the Indo-European languages of the European type, where the subject is easily
identifiable by the criteria of the nominative subject case and of person-number agreement with the finite verb, the establishment of corresponding features for Georgian is much more complex, in a language with e.g. ‘split ergativity’ in which nominative and ergative constructions are distributed in relation to certain tense forms of transitive verbs. Considering the significance of the Georgian verb for the general linguistic discussion among Non-Kartvelologists, an introductory section of the book gives an outline of Georgian, its history and the fundamentals of its morphology and syntax. The extensive autochthonous linguistic literature on the passive is reviewed, critically examined and thereby made accessible to a broader public of linguists. The book deals with theoretical fundamentals, which are eminently important in connection with the Georgian passive, such as the encoding of syntactic relations in the sentence, the concept of ‘subject’, the paradigms of diathesis and valence, and the distinction between inflectional and derivational morphology. Furthermore, various subgroups of dynamic passives are examined with regard to their grammatical, logical, pragmatic, communicative and lexical-stylistic functions. On the basis of examples from the oldest translations of the Georgian Bible, the investigation seek to ascertain the
extent to which the use of passive forms in ancient Georgian literature can be used to prove possible influences or superstratum effects of the dominant Greek source language. From the perspective of general linguistics, it is a noteworthy fact that in the diachronic development from Old to Modern Georgian, an increase of suffixed passive formations and a simultaneous decline of prefixed types can be observed, which is documented by a broad-based research corpus.
Academic Background
PhD Comparative Linguistics, Goethe University Frankfurt /Main (1999-2005)
M. A. German Philology, Ivane Javakhishvili Tbilisi State University (1996-1998)
Faculty of Philosophy, University of Konstanz (1997-1998)
German Studies and Art History, Albert-Ludwigs-University of Freiburg (1995-1996)
B. A. German Studies, Faculty of Western European Languages and Literatures, TSU (1992-1996)
Scholarships
Scholarship of Konrad-Adenauer-Foundation (KAS) for exceptional academic achievement and
outstanding political and social commitment (1999-2004)
Scholarship of German Academic Exchange Service (DAAD) (1997)
GIP special programme scholarship of German Academic Exchange Service (DAAD) 1995
Current Position
Associate Professor at the Caucasus University, CSM (Caucasus School of Media)
Research Foci
Intercultural Communication, Multiculturalism, Linguistic Typology, Philosophy of Language,
Interdisciplinary Studies, Discourse Analysis, Sociolinguistics, Strategic Communication and
Management, Corporate Communication.