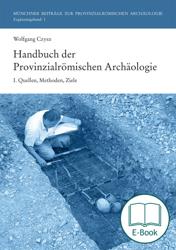 E-book 5.5 MB
The Archaeology of the Roman Provinces is a young discipline. As an academic subject, it has rapidly achieved great successes in the field of excavation and research and has increased our knowledge to a degree that barely keeps pace with the theoretical mastery of the results. The rapid development of scientific methods has contributed significantly to the self-assurance of the subject and opened up new perspectives for future research. Now and again it has been noted that Provincial Roman archeology has neglected its scientific foundations, methods and theories by omitting a reflection of their concepts and the validity of their findings. In the everyday research and teaching process we seldom worry about the meaning of terms such as analogy and hypothesis, chronology and periodization, or other abstract concepts. This volume deals with the basics of scientific theory, sources, methods and research aims of the subject in 140 articles. The reference book helps students to orient themselves in the language and thinking of science; but also the archaeologically interested will benefit from reading the manual.

From 1967 to 1975, Wolfgang Czysz (*1949) studied Archaeology of the Roman Provinces, Prehistory and Zooarchaeology at Mainz, Heidelberg, Oxford and Munich, where he earned his doctorate in 1975. He directed the DFG-Project Heldenbergen (Hesse) from 1975-1977, before entering employment with the Bavarian State Department for Monuments and Sites, more recently as head of division (Thierhaupten/Nuremberg offices), from 1977-2014. In 2002, he submitted his habilitation thesis at the University of Innsbruck and was awarded a lectureship for the Archaeology of the Roman Provinces; in 2011, he was awarded an honorary professorship. Alongside his intensive excavation activity, his research focussed on the archaeology of settlements and craftsmanship, more specifically the archaeology of potteries, brick manufacture and ceramics production. He retired in 2014; that year, he was also awarded the Rainer-Christlein-Medal for his service and contributions to Bavarian archaeology.