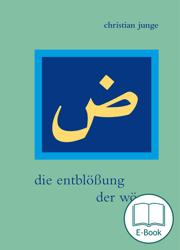 E-book 5.9 MB
How do word lists matter for Arabic literature? From the perspective of Literary and Cultural Studies, this monograph approaches the literary word lists of Aḥmad Fāris al-Shidyāq (1805/1806–1887), one of the most important Arab intellectuals of the nineteenth century, and discusses them as a fundamental social and cultural critique of his time. In the framework of the ‘return to philology’ (Edward Said), the book discovers in al-Shidyāq’s language thinking an intellectual radicalism and artistic experimentation, which sheds new light on the Nahḍa, the Arab renewal movement on the eve of modernity.

Aḥmad Fāris al-Shidyāq (1805/1806–1887) is regarded as one of the most important Arab intellectuals of the nineteenth century. In 1855, in Paris, he published his masterpiece, al-Sāq ʿalā al-sāq fī mā huwa al-Fāriyāq (Leg Over Leg, or, The Turtle in the Tree, Concerning The Fāriyāq What Manner of Creature Might He Be), a landmark in modern Arabic literature, which confronts the reader with numerous word lists.
From the perspective of Literary and Cultural Studies, this book approaches al-Shidyāq’s lists as a fundamental social and cultural critique of his time. It develops a set of analytical tools to describe the epistemic and aesthetic dimensions of ‘exposing words’, and to make sense of the plentiful, but often neglected, word lists found throughout Arabic literature and lexicography. This include, for instance, the poetics of enumerative rhymed prose and lists of synonyms that played a distinctive role in the premodern and early modern Arabic tradition, while they remain largely neglected by literary and cultural studies.
In dialogue with theories of, for instance, Assmann, Barthes and Cixous, the book discusses al-Shidyāq’s word lists as a fundamental social and cultural critique of the nineteenth century. In this regard, the enumeration of arcane Arabic words often negotiate the contemporary discourses of gender, pleasure and language and read them ‚against the grain‘. In the framework of the “return to philology“ (Edward Said), this book treats al-Shidyāq’s approach to language as a radical social and cultural criticism of the nineteenth century, which sheds new light on the Nahḍa, the Arab renewal movement on the eve of modernity.
In regard to the Nahḍa Studies, this study also provides a substantial insight in the middle period of al-Shidyaq’s works written and published in London and Paris between 1848 and 1857. Drawing on fresh sources, it traces al-Shidyaq position within networks of Arab and European scholars and authors, and it unearhtes, for the first time, the historic Arabic and European reception of al-Sāq. The extensive supplement provides a selection of Arabic, French, English, and German paratexts from the nineteenth century that are important for understanding al-Shidyāq’s life and work.

Christian Junge is a lecturer and researcher in the field of modern Arabic literature and culture at the Center for Near and Middle Eastern Studies at Philipsps-Universität Marburg. He studied Comparative Literature and Arabic Studies in Berlin, Paris and Cairo. He was fellow of the Friedrich Schlegel Graduate School of Literary Studies at the Freie Universität Berlin, where he received his PhD on al-Shidyāq. He is member of the Arab German Young Academy (AGYA) and Co-Director of the summer school program „Arabische Philologien im Blickwechsel“ (arabic-philologies.de/en). His main areas of research are Arabic literature and philology of the nineteenth century, emotions in postmodern Egyptian literature and academic Arabic in postcolonial theory.