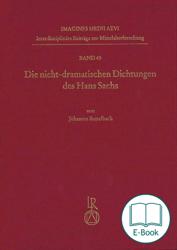 E-book 9.5 MB
Hans Sachs (1494–1576) is the most powerful German-language author of the 16th century with a body of work comprising more than 6200 songs. In recent decades, research on his rhyme and song poetry has been limited to individual studies and shorter summaries. At first, this volume presents the poetological foundations of his work. Sachs' own highly developed awareness of forms, genres, and themes sets the starting point for a presentation of his poetry according to text types in their sources, processing patterns, and in their direction in Nuremberg, which was becoming Protestant, and Germany. The different medial realizations in writing, picture and imagery, reading and singing give a diversified face to the texts from ancient, biblical and medieval tradition, which are made accessible here in an overview and by examples.
This series, which will comprise doctoral and professorial dissertations and other monographs as well as collective volumes, aims at highlighting and promoting interdisciplinarity in Medieval Studies even more than is currently the case. Works from all branches of Medieval Studies will be accepted, provided they emphasise the aspect of interdisciplinarity, i.e. they attempt to transgress the boundaries of any single subject.