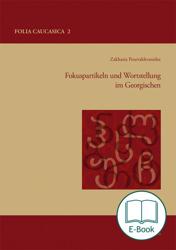 E-book 2.2 MB
The topic of the book is the so called “Focus particles” and their interaction with the word order regularities in Georgian, as the most prominent representative of the south caucasian or Kartvelian language family of the official language of the republic of Georgia and which is also known in the general linguistics as a language with mostly “free” word order.
The monograph “Focus particles and word order in Georgian Language “ represents one of the first corpus linguistic investigations of the Georgian language to this extent and is based on the material of extensive databases amongst other is the Georgian National Language Corpus (around 130 million tokens).

The study of the information structure in the human languages is one of the most important and actual tasks of modern linguistics. In the Georgian language the elements that are mostly known as ”modal particles”, for which the monograph proved its unique function as focus particles, are generally poorly investigated especially with regard to their functional distribution.

As a special property of this investigation, is the attempt to transfer the problematic focussing to the pragmatic functional level of the language and to use in addition to the purely syntactic criteria, the semantic-pragmatic criteria in the study.

The following points are to be highlighted:
- The morphemic reported elements which are found in the literature under different names such as particles, or selective particles are first defined in this study as “focus particles” and they are given a semantic-functional importance. In comparison to deterministic functions in the scientific literature which are based on different criteria and to what is carefully named “highlighting functions” of these elements, the relevant function of the information structure will be detected in this study, and this unique functionality will be justified.
- In this study , the study of the highlighting function (focus) on the whole range of the semantic modifications, which are derived from the focus particles i.e. focus-scopus will be extended. It is to note through tests, that the focus particles highlight total phrases which are not freely convertible. The contrasting of the syntactic order tests enables the determination of the grammatical and communicative acceptance, and the pragmatic sensitivity of the focus particles in their use.
- The concurrent use of the focus particles that belong to a focus-group is excluded.
- The focus-group-bond and the order restriction of the particles is stronger in the position before the verb than in the position after the verb.
- By using order rules of the individual focus-groups in this work, a clear, unified model of the order constraints in relation to the predictive verb is presented, which also determines the focus sensitive verb finalities a base word order in the Georgian language. The different responses of the focused elements (words/scopi) in order tests before and after the verbs establishes an informational and structural division of the sentence structure in the Georgian language , with the dominant position- focus being immediately before the verb.
Dr. Zakharia Pourtskhvanidze
6. October 1972 in Kutaisi, Georgia