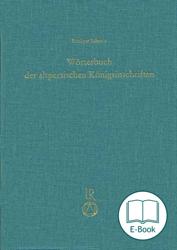 E-book 4.0 MB
The present volume is closing a gap of the specialist literature felt for some time. In it may be found a comprehensive Old Persian dictionary based on the author’s edition of the texts („Die altpersischen Inschriften der Achaimeniden“, Wiesbaden 2009); it contains lists of the transliterated and transcriptional word-forms (including full references), the lexicon proper arranged by word-stems, roots etc. as well as reverse indexes to both the lists and the lexicon itself (verbal roots, nominal and pronominal stems and indeclinable words being kept apart).

The present volume is closing a gap of the specialist literature felt for some time, because the glossaries and dictionaries available cover the Old Persian vocabulary only in part and are defective in some respects. For preparing a new Old Persian dictionary the situation is quite favourable at present, since a complete edition of the royal inscriptions has been published in 2009 by the author in his book “Die altpersischen Inschriften der Achaimeniden” (Wiesbaden 2009), where only some texts of minor relevance, the inscriptions on vessels, seals (and sealings) and weights, had been ignored. A dictionary like the present comprehensive work probably never had been tackled before for a corpus language like Old Persian, for in order to cope the divergent needs of all sorts of users it contains six separate lists or indexes: lists of (1) the transliterated and (2) the transcriptional word-forms (this one giving a short grammatical definition and a list of all references), (3) the lexicon proper, arranged by word-stems, roots etc. and giving a translation as well as short information about the (syntactical, phraseological or other) use of the word and its etymology, and finally (4–5) reverse indexes of the first two lists and (6) of the dictionary itself (verbal roots, nominal and pronominal stems and indeclinable words being kept apart).

Rüdiger Schmitt, from 1979 to his retirement in 2004 Professor of Comparative Indo-European Philology and Indo-Iranian Studies at Saarland University in Saarbrücken; born in Würzburg on June 1, 1939; studies from 1958 to 1965 in Würzburg, Erlangen and Saarbrücken, particularly with Manfred Mayrhofer; after publications on Indo-European poetical language, on the Greek and Armenian languages specialized on the ancient Iranian languages, Old Persian epigraphy and, above all, Iranian personal names.