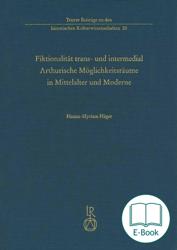 E-book 2.4 MB
In this dissertation the author asks if the people in the Middle Ages already had an awareness of fictionality in today’s sense. She investigates this question through a comparison between Middle High German Arthurian romances and modern Arthurian films/television series and also by introducing a semio-pragmatical approach.
The starting point of the analysis is the debate on fictionality of premodern literature which has broadly been discussed by scholars within the field of German Medieval Studies but it still remains highly relevant. Especially the genre of Arthurian romances has brought up the question if the contemporary understanding of fictionality is similar to that of the medieval perspective. The project seizes on this discussion but expands it with two innovative aspects. On the one hand, it presents a trans- and intermedial comparison between Arthurian texts from the Middle Ages and modern Arthurian films/television series from the 1950s to the 2010s. On the other hand, it takes a semio-pragmatic approach which considers the textual composition as well as the reception. Against this background, it analyses the narratological possibilities of the Arthurian narrative on a textual and filmic level. On the pragmatic level, the project further engages with concepts of the spatial turn and investigates Arthurian narration in the light of spatial aspects. In doing so, text and film are understood as dynamic spaces in which cultural conditions and peculiarities are formed and negotiated, social rules and norms are discussed and knowledge is stored and extended. This is why the project conceptualizes the term ‚Möglichkeitsraum‘.