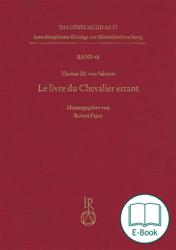 E-book 8.2 MB
From 1394 to 1396 the Piedmontese marquis Thomas III of Saluzzo wrote a long encyclopaedic novel in French in which a knight wanders through the three allegorical worlds of Cupid, Fortuna and Lady Knowledge. Like hardly any other work of the era, Thomas’ text reflects the knowledge, literary taste, and self-image of a late medieval nobleman. This is edition based on the two preserved manuscripts. It makes Le livre du Chevalier errant for the first time accessible in a philologically reliable form and opens it up by a detailed introduction and a comprehensive appendix.