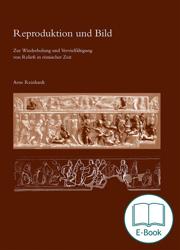 E-book 12.6 MB
The ancient (re-)production of images seen through a cultural-historical perspective is at the heart of this study, which, by the means of case studies, examines the specific situational conditions and various influences concerning the production of relief images in the period between the first century B.C.E. and the second century C.E. in Central Italy and Attica. The focus of the first part is on questions regarding the handling of ancient techniques of reproduction, the reception of preceding images and the alterability of their contents. The second part, which builds on the first, is dedicated to the modification of pre-existing images as well as the contextual embedment of relief images, which were manufactured as serial pieces for the furnishing of private and public spaces.

The (re-)production of Roman imagery as a phenomenon of ancient cultural history is at the heart of the volume at hand. It aims to provide close insight into visual culture as well as a differentiated assessment of the question, in what settings and with which needs in mind compositions were being iterated and replicated in the period from the first century B.C.E. to the second century C.E. While focusing on the participating protagonists and their intentions as well as on aspects of representation, a special emphasis is placed on the alterability of images and their contextual embedment.

In the first part of the book the technical foundations are being examined in a complementary approach through the example of the so-called toreutic plaster casts (in particular moldings of vessel walls showing reliefs). Here in particular, the situational conditionality of the (re-)production becomes evident, as one finds on equal footing complete and – even more frequently – partial reproductions, which served as a starting point for new compositions in the sense of the modern ‘copy and paste’ and were received as such by other handicraft branches.
The main part of the work is concerned with serial pieces in the field of marble reliefs as well as relief carriers belonging to the luxurious Roman décor. After discussing the term ‘series’ the focus of the subsequent three detailed studies is on the congruency and variance respectively between serial pieces, whereat the latter is being interpreted as an indication for external influences on image reproduction. In this sense in the case of the Piraeus reliefs selective deviations in design and motif within the series of this find come to attention, which can be read as a confident, independent exertion of influence by the executive sculptors within the cultural setting of the Second Sophistic. The next case study deals with a multi-piece consecration gift in the Temple of Diana in Nemi and interprets the two appendant series and their variance with regard to the representational intensions of the benefactor. The observations made in these case studies are being presented with further serial pieces in a last detailed study. On this basis, overarching phenomena within luxurious Roman décor, within which the subject of serial production forms a characteristic facet of visual culture, become evident.

The work ties in with current research discussions from both Classical Archaeology and Art and Cultural Science and aims to broaden the established view of the ancient reproduction of images as a traditional question of diachronic pictorial reference or technological history respectively. Through its synchronous and context-related viewing of reproduced images the representation of participating protagonists, prevalent habits of seeing and aesthetic ideas as well as overriding questions regarding the constitution of meaning in images become more apparent as important facets of ancient image (re-)production.

Arne Reinhardt, born in 1985, studied Classical Archaeology as well as Latin and Greek Philology at the University of Munich with semesters abroad in Florence and Rome. From 2011 to 2015 he was a project collaborator at the Winckelmann Institute of the Humboldt University of Berlin, where he also wrote his dissertation, which was overseen by Susanne Muth and later awarded the travel grant of the German Archaeological Institute. Since 2016 Arne Reinhardt is a research associate at the Archaeological Institute of the University of Heidelberg. His research focuses on Roman Archaeology in the field of visual culture – here in particular on relief sculpture in marble and terracotta – as well as on archaeological reception research.